St. Michael-Albertville rides big second half to put away Minnetonka

Mackenzie Kramer, who had a game-high 20 points, helped guide the Knights to a victory over the Skippers. 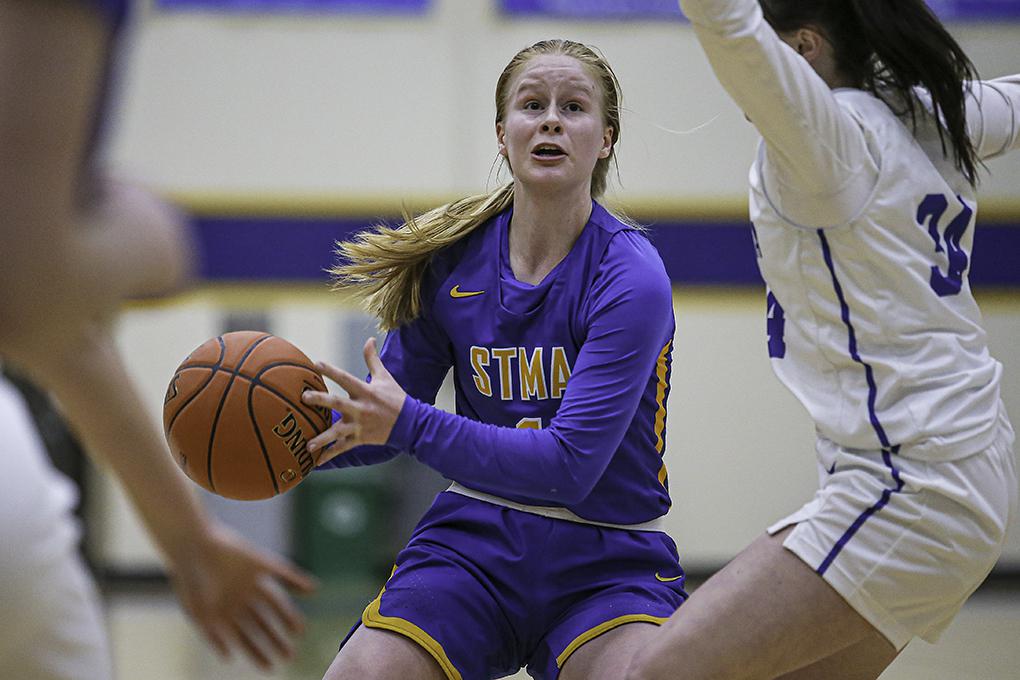 St. Michael-Albertville senior Mackenzie Kramer (1) looked for a shot in the second half of the Knights' 70-38 victory over Minnetonka. Kramer scored 20 points. Photo by Mark Hvidsten, SportsEngine

As a member of the Mississippi 8 Conference, St. Michael-Albertville had seen its share of Lake Conference opponents — such as Hopkins, Wayzata and Minnetonka — in nonconference play.

This year, however, the Knights joined the Lake, which means getting a much heavier dose.

Knowing the caliber of the programs that play in the Lake, St. Michael-Albertville coaches and players have worked to up their game. So far, the results are noticeable as the Knights (10-3, 3-0) continued their perfect start in league play by defeating Minnetonka in a 70-38 romp at home on Tuesday night.

For the past few years, the Knights have shown themselves to be contenders at the state level while being head and shoulders above the rest of the Mississippi 8, as St. Michael-Albertville hadn’t lost a conference game going back to 2013.

“We got too comfortable,” Knights coach Kent Hamre said. “The Mississippi 8 is a great conference but we outgrew it.” 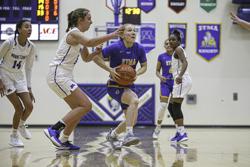 While the move brought excitement, it also brought the realization that the stakes were raised for St. Michael-Albertville, ranked No. 5 in Class 4A by Minnesota Basketball News. That change was felt from Hamre down.

“We knew the level of competition was going to go up and be there every night,” Hamre said. “We had to prepare better, and get deeper so more players could contribute for us.”

The work the Knights have put in at practice paid dividends on Tuesday, as the team’s offense kicked into gear quickly with the Knights leading by as many as 18 points in the first half.

Soon after, however, Minnetonka fought back to make it a seven-point game at the break. Then, the Knights surged again in the second half with their lethal offense that comes from a variety of sources, leading to St. Michael-Albertville outscoring the Skippers 39-14 in the second half.

“When we made a run in the second half, we had five players on the floor who were all scorers,” Hamre said. “We can do things like that, and bring out bigger players and force them to play on the perimeter.”

The leader of St. Michael-Albertville’s offensive effort is senior guard Mackenzie Kramer. The Lehigh commit entered Tuesday’s game averaging a team-best 17.8 points per game. Despite just 14 points in her previous two games, Kramer showed herself to be a seasoned veteran and brushed off her recent lull to finish with a game-best 20 points.

“She’s really been the go-to player for us this season,” Hamre said. “She does it with scoring but tonight she showed she can make that extra pass. She’s a veteran and knows when to push ahead and how important she is to our team.”

And while Kramer spearheads the team’s offensive output, she acknowledges the joy of playing with all of the talent around her.

“It’s great for all of us,” Kramer said. “It takes the pressure off of us, knowing that if we have an off night there are other players who can come in and score for us.”

St. Michael-Albertville’s improvements have shown thus far through the early portion of Lake play. But things get turned up a notch on Friday when No. 3-4A Wayzata comes to town. The Trojans’ only loss to date this season came against No. 9-4A Park Center back in mid-December.

Though the challenge may be difficult, mention of Friday’s game brought smiles to the faces of both Kramer and Hamre.

“We’re just really excited to have a chance to go up against a really good team like Wayzata,” Kramer said. “We’ll be focused. Hopefully there’s a big crowd so we can have a great atmosphere.” 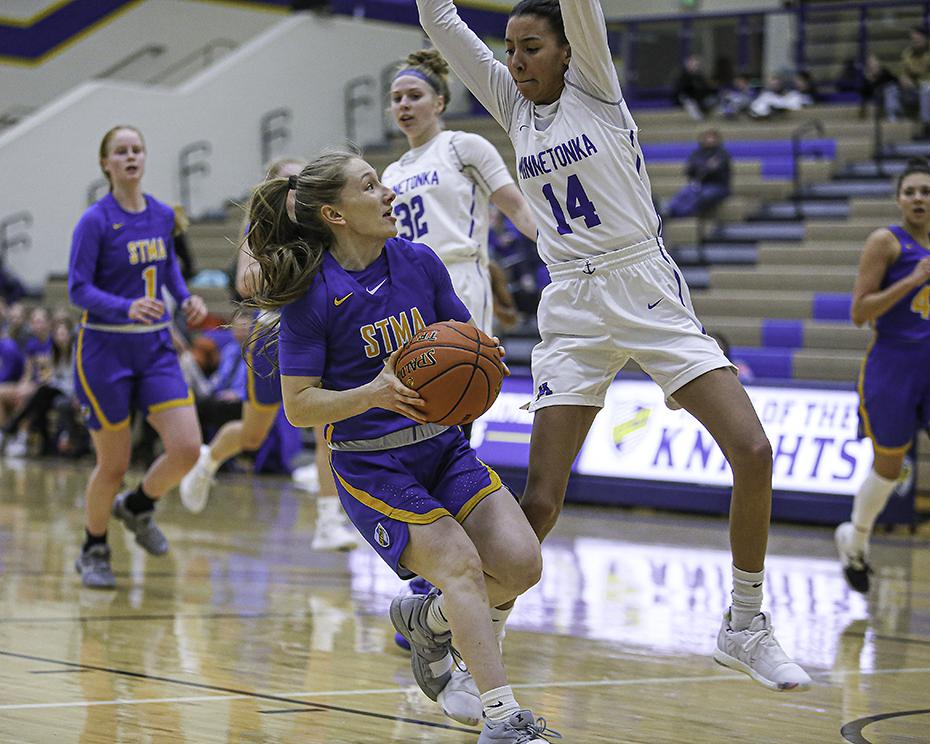 Sophomore Emma Miller had her path momentarily blocked by Minnetonka's Tori McKinney (14) as she drove to the basket. Miller scored 12 points. Photo by Mark Hvidsten, SportsEngine

After galloping to a 27-9 lead in the first half, it appeared as if St. Michael-Albertville would claim an easy victory over Lake Conference foe Minnetonka.

Minnetonka managed to cut the lead to single digits before halftime, but the Knights’ offense proved to be too much in the second half, resulting in St. Michael-Albertville defeating the Skippers 70-38 at home on Tuesday evening.

The Knights (10-3, 3-0) stayed unbeaten in conference play behind their array of sharp shooters, led senior guard Mackenzie Kramer, a Lehigh commit who dropped three three-pointers to help her to a team-high 20 points.

St. Michael-Albertville, ranked No. 5 in Class 4A by Minnesota Basketball News, also got significant contributions from senior Lily Tennyson, who scored 14 points, including a trio of three-pointers in the second half. Sophomore Emma Miller added 12 points.

Minnetonka (9-5, 1-2) fell behind early but cut the lead to seven points at the break as junior Piper Terry knocked down a three-pointer as the first half expired. She led the Skippers in the first half with seven points but failed to score in the second half. 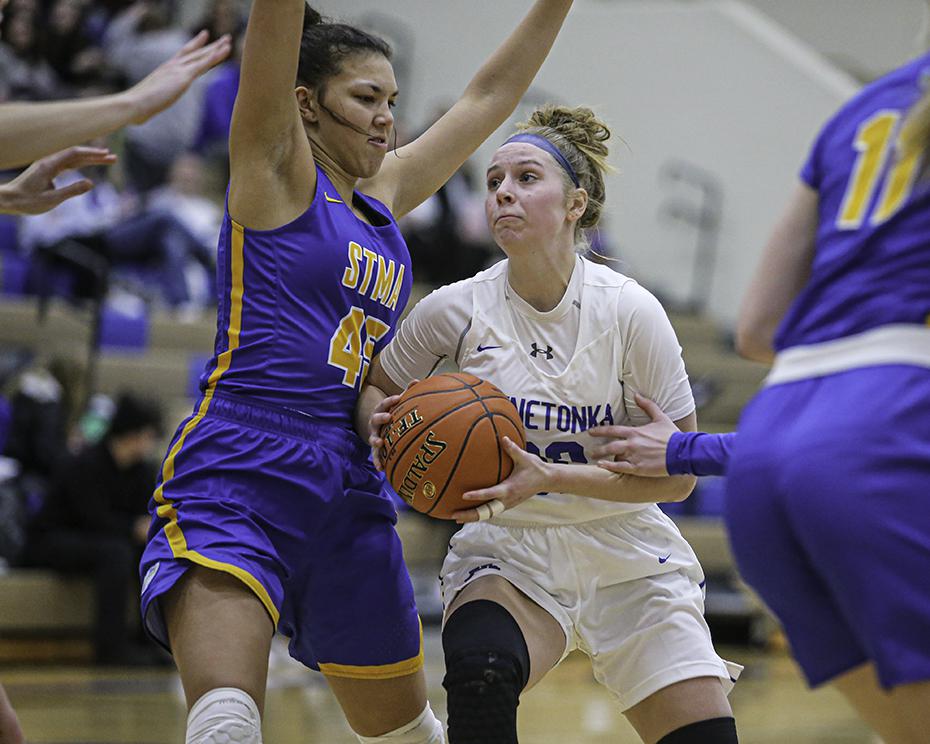 Minnetonka's Piper Terry tried to get past Knights defender Vanessa Alexander in the second half. Photo by Mark Hvidsten, SportsEngine