Hannah Herzig buried a three-pointer to give the Cougars a two-point lead with 2.6 seconds remaining. 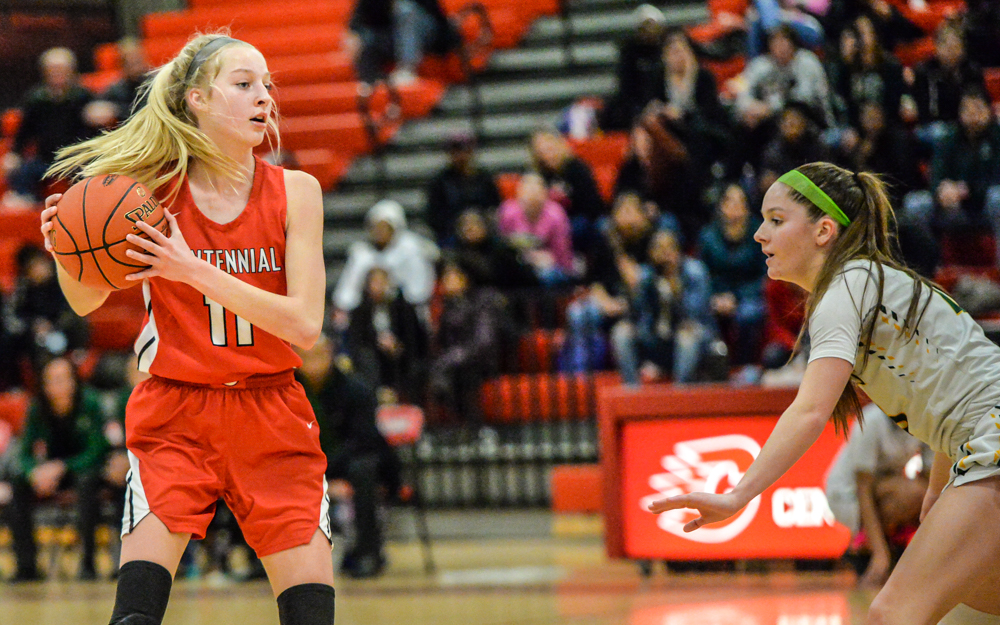 There’s a famous story about former Chicago Bulls coach Phil Jackson unlocking Michael Jordan’s full potential as a superstar in Game 5 of the 1991 NBA Finals. In a timeout, Jackson asked Jordan who was open, and Jordan, having regularly been double teamed throughout the game, responded that John Paxson was open. Jackson (emphatically) told him to pass Paxson the ball.

Paxson went on to score 20 points in that game, making some key buckets down the stretch to help the Bulls win the first of their six NBA championships.

Centennial, ranked No. 4 in Class 4A by Minnesota Basketball News, had its own version of that story play out on Tuesday night, as the dominant play of Jenna Guyer put the full attention of No. 9-4A Park Center’s defense onto her throughout the game, opening up plenty of shots for Guyer’s teammates, culminating in a 73-71 come-from-behind victory for the Cougars.

The Cougars (13-2, 2-1) were trailing by a point with 21.1 seconds remaining in the second half when they got the ball back from the Pirates (12-3, 3-1) after a turnover. That’s when Centennial coach Jamie Sobolik drew up a play for Guyer, who had dominated the game with 28 points and 19 rebounds.

“We had a special play that we were going to set up with the goal and the intent of getting Jenna a little high-low play down there,” he said.

The play didn’t work. The Pirates denied an entry pass to Guyer and they were not going to let her get the ball in the post. But there was a secondary plan. 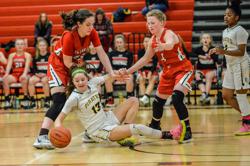 Hannah Herzig was camping out for a three-pointer on the wing, and when teammate Jodi Anderson’s drive to the hoop was cut off, she kicked the ball out to Herzig who buried the game-winner with less than three seconds to go.

“I knew that they were definitely looking for Jenna to get the open basket, because she’s been scoring so many and been able to execute,” Herzig said. “But I just knew that we had to be able to get a shot off, and if they were going to close it out just to be open and get a good look out of it.”

That shot gave Herzig 15 points in the game, a few shy of Paxson’s 20 in 1991, but the attention the defense put on Guyer, and the unselfishness of the five Cougars players on the floor had given her plenty of opportunities to score.

“It’s so fun to play with Jenna,” Herzig said. “It’s really nice not having one person scoring — being able to pass it all around. And it really helps having Jenna being able to execute in the paint.”

Sobolik was impressed with his entire team’s performance, especially in the second half. Though he was especially complimentary of Guyer’s dominance.

“She brings an element that is very difficult for a lot of teams to guard. They either don’t have the size to guard her, or they don’t have the athletic ability to guard her. We know we’ve got a diamond in the rough there, and she’s only getting better,” he said.

While the Cougars were able to come away with the victory, it was in doubt for some time. The Pirates had the lead for a vast majority of the game, as their high-pressure defense forced 30 turnovers, which turned into a lot of transition points.

The Pirates’ Aaliyah Ragulen racked up nine steals, helping lead to her team-high 25 points. Most of her remaining points came on open threes when teammates Lauren Frost or Adalia McKenzie drove to the hoop, leaving Ragulen open in Centennial’s zone.

Frost finished with a team-high eight assists, while McKenzie added five to go along with her 21 points and nine rebounds. 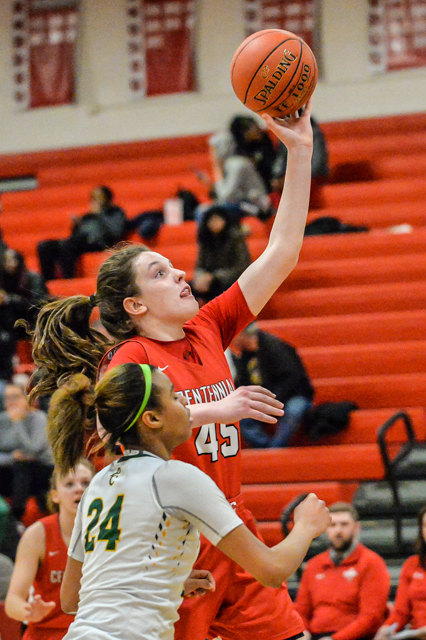 The Cougars' Jenna Guyer (45) had a game-high 28 points as the Cougars beat the Pirates 73-71 at home Tuesday night. Photo by Earl J. Ebensteiner, SportsEngine

Despite trailing for all but the final seconds of the second half, Centennial fought off Park Center at home to secure a dramatic 73-71 victory on Tuesday night.

The Cougars forced a turnover instead, and got to the free-throw line after a foul occurred on the ensuing fast break. Both free throws were missed, and the Pirates once again had a chance to try and kill the game. Instead, Centennial forced yet another turnover, giving the Cougars the ball back with 21.1 seconds on the clock.

The Cougars, ranked No. 4 in Class 4A by Minnesota Basketball News, tried to run a play for Jenna Guyer, who had a game-high 28 points and 19 rebounds, but the play broke down. This forced teammate Jodi Anderson to improvise, so she drove into the paint and then kicked the ball out to a wide-open Hannah Herzig, who buried the three-pointer to give the Cougars a two-point lead with 2.6 seconds left.

The No. 9-4A Pirates had no timeouts remaining, so they had to force a full-court shot that came up short.

Anderson finished with 18 points and a team-high seven assists for Centennial, while Herzig added 15 points. 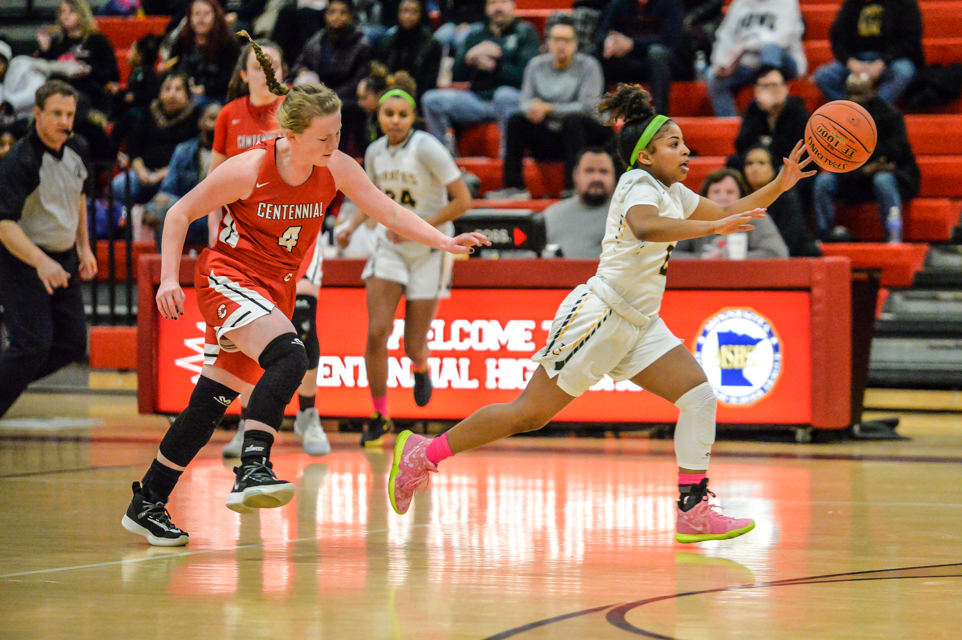