The Elks continued to push their lead throughout Friday’s game thanks to a strong offensive output. 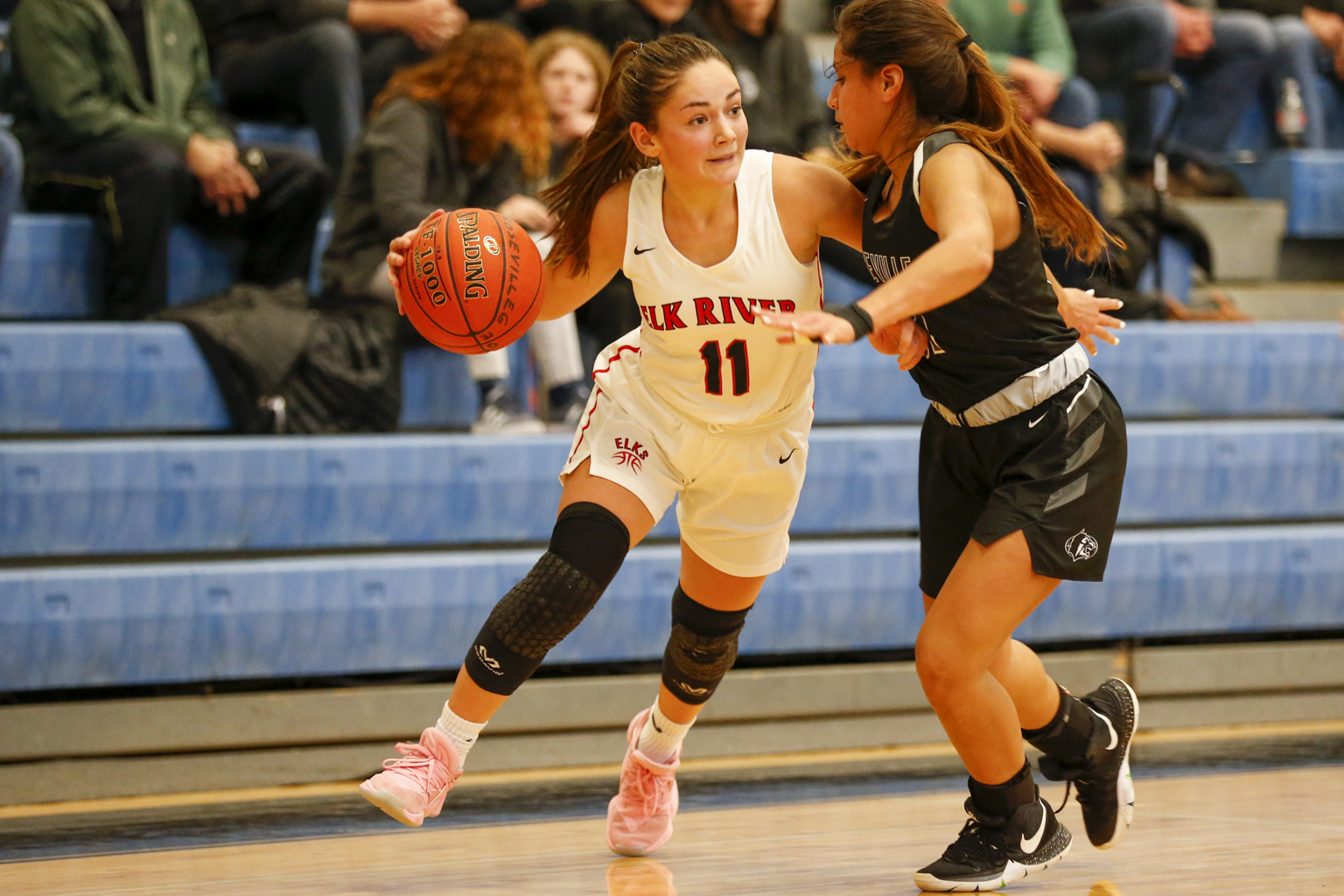 Elk River's Lydia Haack (11) dribbles around Roseville's Reilly Parker (31) during Friday afternoon’s game. Haack had 24 points in the Elks’ 75-53 victory over the Raiders in Roseville. Photo by Jeff Lawler, SportsEngine

Late in the first half of Friday’s game, Elk River and Roseville found themselves knotted up at 25. While the two teams had the same amount of points, they came in very different ways.

The Elks got there after strong shooting performances from their go-to players. Meanwhile, the Raiders took advantage of Elk River fouls and scored mostly from the free-throw line.

Soon after this tie, the Elks shot their way ahead and never looked back. They finished the half on a 17-5 run and kept building on the lead. By the end, Elk River walked away with a 75-53 win at Roseville Area High School.

In the early goings of Friday’s tilt, the Elks, ranked No. 10 in Class 4A by Minnesota Basketball News, leaned on senior guard Lydia Haack as she provided a major scoring punch. She came into the game averaging a team-best 12.7 points per game. By the end of the first half on Friday, she already had 18 points. Haack finished with 24 points.

“Lydia’s a sharp-shooter,” Elk River coach Jeremy Digiovanni said. “Our players are not shy about getting the ball up to the hoop.”

The increased scoring output came as the Elks (8-3, 2-0) attacked the Roseville (7-6, 3-2) zone defense with shots from outside the paint. Elk River had nine players score on Friday, showing the Elks have many different options on the offensive end.

“This team has shot the ball very well,” Digiovanni said. “They share the ball and work together to get the best shot. They’re an unselfish group. Sometimes, they’re even too unselfish.”

At the half, Elk River had a 12-point lead, but Digiovanni wasn’t completely satisfied. After Roseville scored 13 of its 30 first-half points on free throws, he wanted his team to make the Raiders earn their points in the second half.

“We had to quit following them and giving them chances at the free-throw line,” Digiovanni said. “We had to make them run their offense.”

The team listened to its coach as the Elks clamped down and watched their lead grow and exceed 20 points. That was due in part to Haack’s tough approach going up against the Roseville guards. While she’s had years of success on offense, she has focused on improving her defense this season. Her aggressive approach helped Elk River force 22 turnovers on Friday.

“I’ve worked on being more aggressive,” Haack said. “I try to get up in the guard’s business and make them uncomfortable.”

Haack’s improvement has been noticed, including by her coach.

“Her improvement on defense is something that should not go unnoticed,” Digiovanni said. “Her play there helped us get fastbreaks and move to the offensive end.”

Haack is part of a veteran team who has played together all the way up through the Elk River youth program. The team’s experience has helped on both ends of the floor and resulted in an unselfish group willing to do what it takes to win games.

“We trust wach other,” Haack said. “We’ve been playing together for a long time now. We know everyone’s a threat to score.” 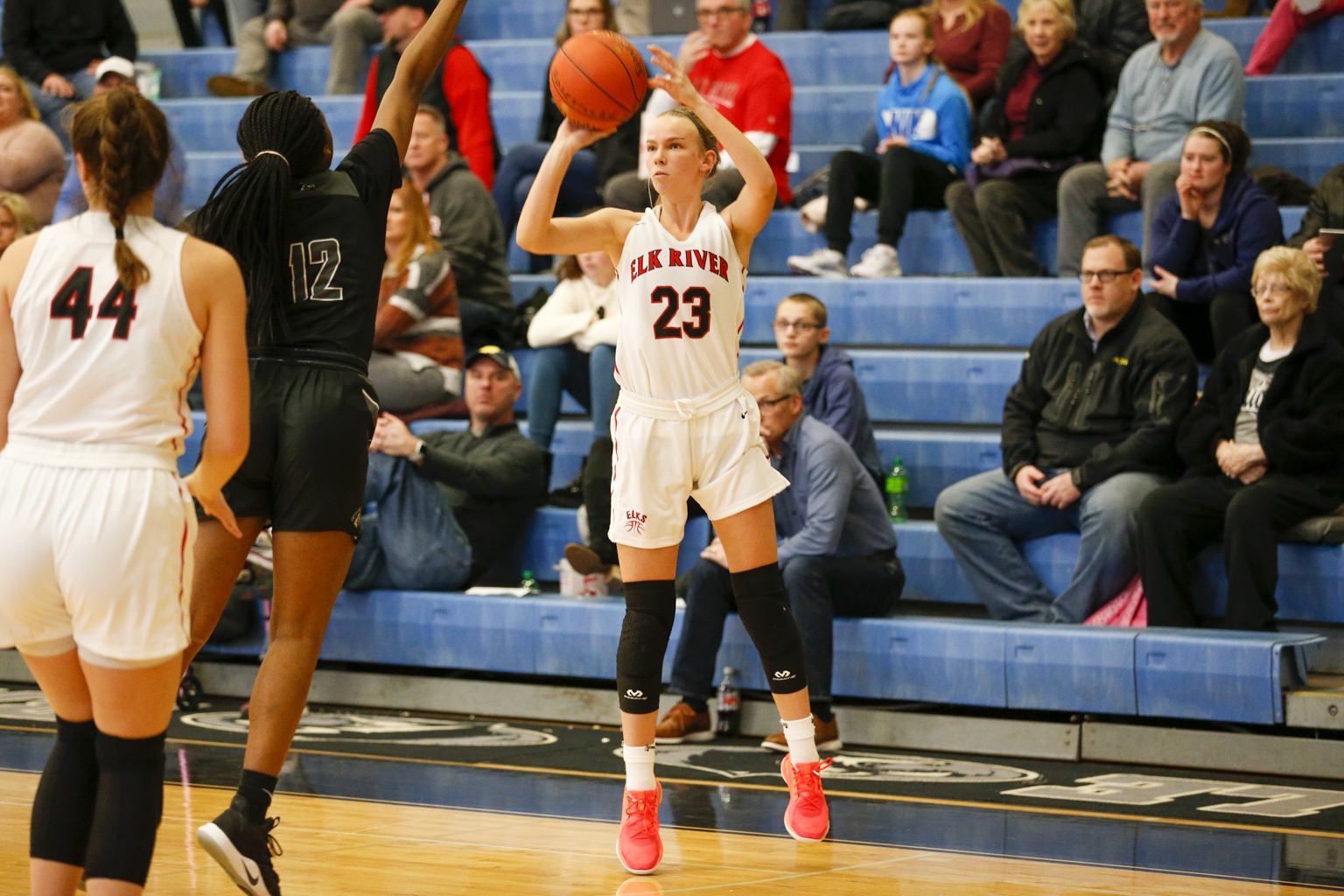 Elk River's Alexa Engebretson (23) puts up a three-point shot against Roseville. Engebretson had 16 points in the Elks’ 75-53 victory over the Raiders in Roseville. Photo by Jeff Lawler, SportsEngine

After Elk River and Roseville battled to a 25-25 tie late in the first half, the Elks imposed their will in this nonconference matchup. Elk River finished the half on a 17-5 run and continued to push their lead as the Elks cruised to a 75-53 victory on Friday at Roseville Area High School.

The biggest story of the first half for Elk River (8-3, 2-0) was senior guard Lydia Haack. She led all scorers in the first half with 18 points and knocked down three three-pointers. Haack finished the game with 24 points.

The Elks, ranked No. 10 in Class 4A by Minnesota Basketball News, had three players score more than 10 points in the win. Senior forward Alexa Engebretson put up 16 points. Junior forward Johanna Langbehn finished with 10 points.

Roseville (7-6, 3-2) struggled against the Elk River defense as the Raiders turned the ball over 22 times in the loss. Junior guard Rai’Janee Meadows was Roseville’s top scorer with 16 points. That was thanks in part to 19 free-throw attempts in the game.

Senior forward Josie Haug was the only other Raider in double digits. She finished with 11 points. 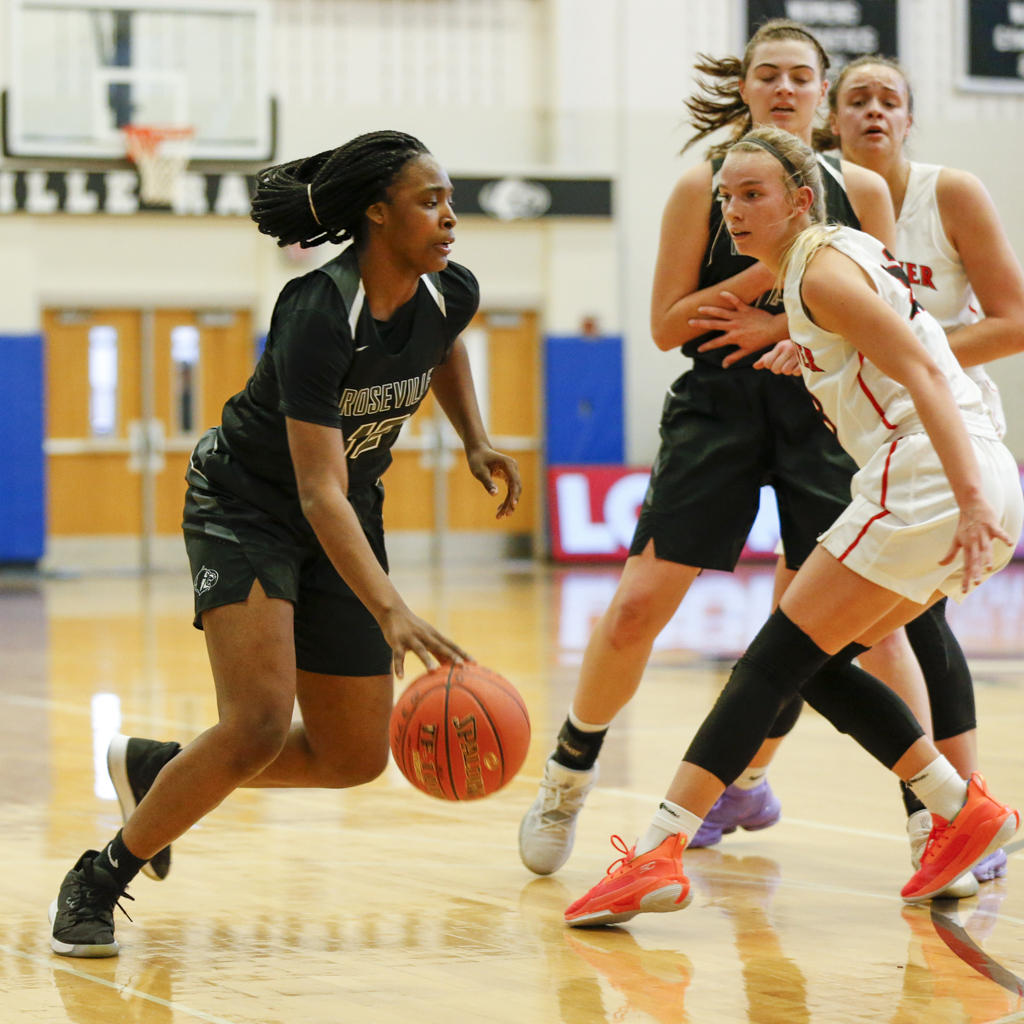 Roseville's Rai'Janee Meadows (12) works to get around Elk River's Alexa Engebretson (23) during Friday afternoon’s game. The Raiders fell to the Elks 75-53 at Roseville High School. Photo by Jeff Lawler, SportsEngine