Jenna Guyer poured in 18 points and gathered 18 rebounds in the Cougars’ defeat of the Hawks. 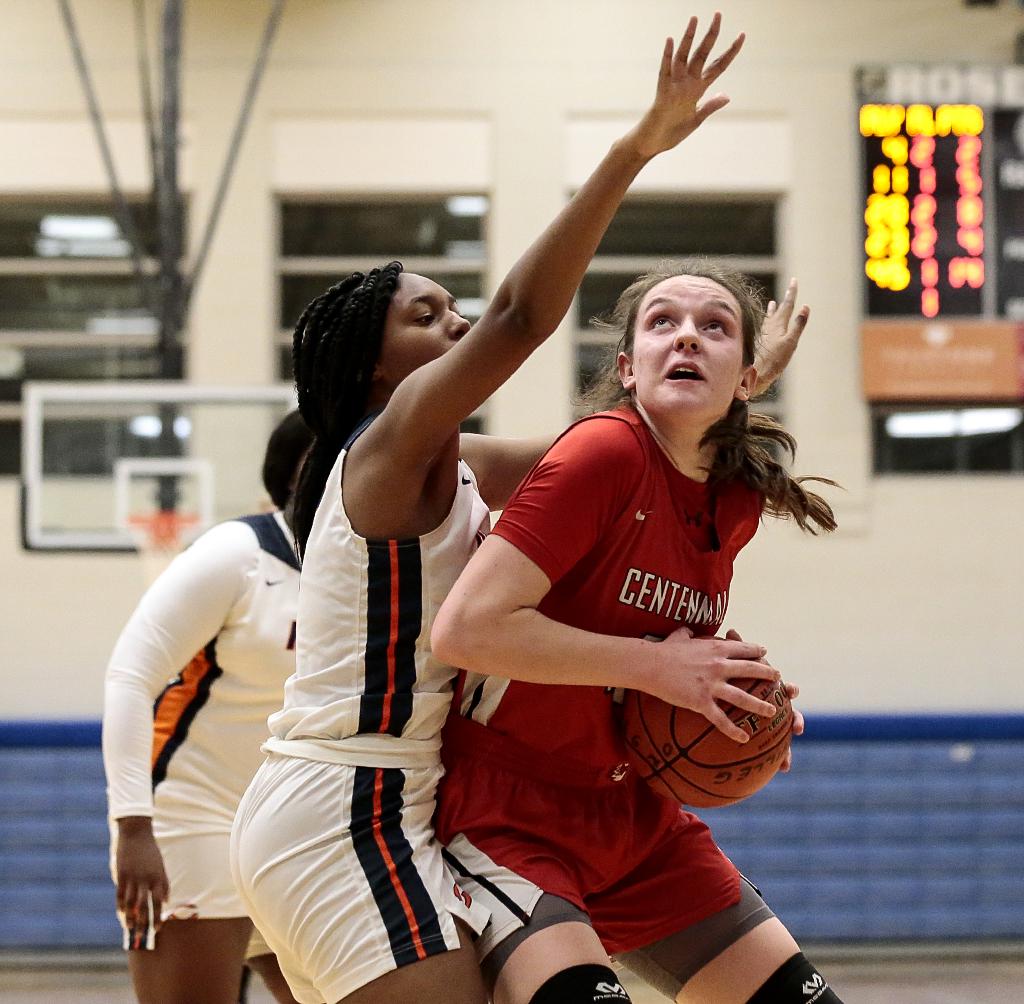 Centennial's Jenna Guyer (45) scored 14 points in the first half and finished with a game-high 18 points. The Cougars outscored the Hawks by 12 points in the second half for a 61-49 win at Roseville Area High School. Photo by Cheryl A. Myers, SportsEngine

With a roster filled with players who run cross-country in the fall, Centennial coach Jamie Sobolik likes his team to use that speed to fly up and down the court.

The Cougars, however, had some speed to compete with on Friday as they faced another group of speedsters in Robbinsdale Cooper.

In a clash of teams looking to push the pace of play, Centennial managed to grab a slim lead and never let go. The Cougars used their fast-paced play and large doses of star post Jenna Guyer to defeat the Hawks 61-49 at the 2019 Roseville Holiday Girls’ Basketball Tournament.

The speed for both sides started at the guard position. The backcourt players on both sides spent the entire game looking to outrace each other down the floor.

But the matchup that loomed the largest came in the middle, as Centennial (8-1, 1-0) featured Guyer, a 6-foot-2 junior center averaging 17.1 points and 14.1 rebounds per game. Cooper, meanwhile, countered with junior center Meme Wheeler, who came into Friday’s tilt averaging 15.4 points per game. 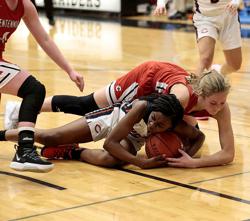 Guyer and Wheeler each had their moments. Guyer got the best of the matchup in the early goings as the Cougars, ranked No. 5 in Class 4A by Minnesota Basketball News, raced to an early lead. In the first three minutes, Guyer already had four of her team’s eight points.

The Hawks, however, didn’t back down against their opponent. Cooper (6-2, 0-0) soared back with Wheeler adding six points in the first half. Her effort on offense and on defense helped the Hawks push the game to a 26-26 deadlock at halftime.

“Instead of running up against that defense, we stood still and got stagnant.” Sobolik said. “We wanted to shoot three-pointers and we went 0-for-14 in the first half.”

While Wheeler had her standout moments, she also spent some time resting on the bench, which was not the case for Guyer who played all 36 minutes and managed to tally 18 points and 18 rebounds while guarding Wheeler.

Though Guyer doesn’t run cross-country like some of her teammates, she uses a similar training regimen so she’s able to stay out on the floor.

“It’s fun just to be out there going up against players who might be bigger or better than me,” Guyer said. “Those breaks like timeouts help, but so do my cheering teammates.”

Playing all, or nearly all, of the entire game is something Guyer’s been doing the entire season. Sobolik has adjusted the offense so Guyer doesn’t earn as much wear and tear, but she’s still a force in the paint whenever she’s there.

“The crazy thing is just that she never gets tired,” Sobolik said. “We don’t get too concerned because we give her some time to relax so she’s not constantly bumping up against opponents in the post.”

Wheeler managed a double-double for Cooper as she finished with 14 points and 12 rebounds. But that effort wasn’t enough to overcome the performance of Guyer.

In addition to Guyer, her teammates also stepped up. With the Centennial lead staying around six points most of the second half, the Cougars’ array of guards chipped in. Junior Jodi Anderson finished with 16 points, while sophomore guard Hannah Herzing added all nine of her points in the second half.

“We’ve showed in a lot of games so far this season that we have confidence that we can win,” Sobolik said. “It really showed tonight, and our girls have done a good job of showing composure despite being a young team.”

This week’s stretch of games is a change of pace for Centennial, as the Cougars are participating in an eight-team, bracket-style holiday tournament. It’s an opportunity Sobolik and his team have looked forward to.

“I love the idea of having a tournament with a similar style to sections or state during the season,” Sobolik said. “The girls get up for it. They want to win this thing.”

Centennial will take on host Roseville on Saturday at 6:15 p.m. while Cooper will face Hastings at 4:30 p.m. in a consolation bracket matchup. 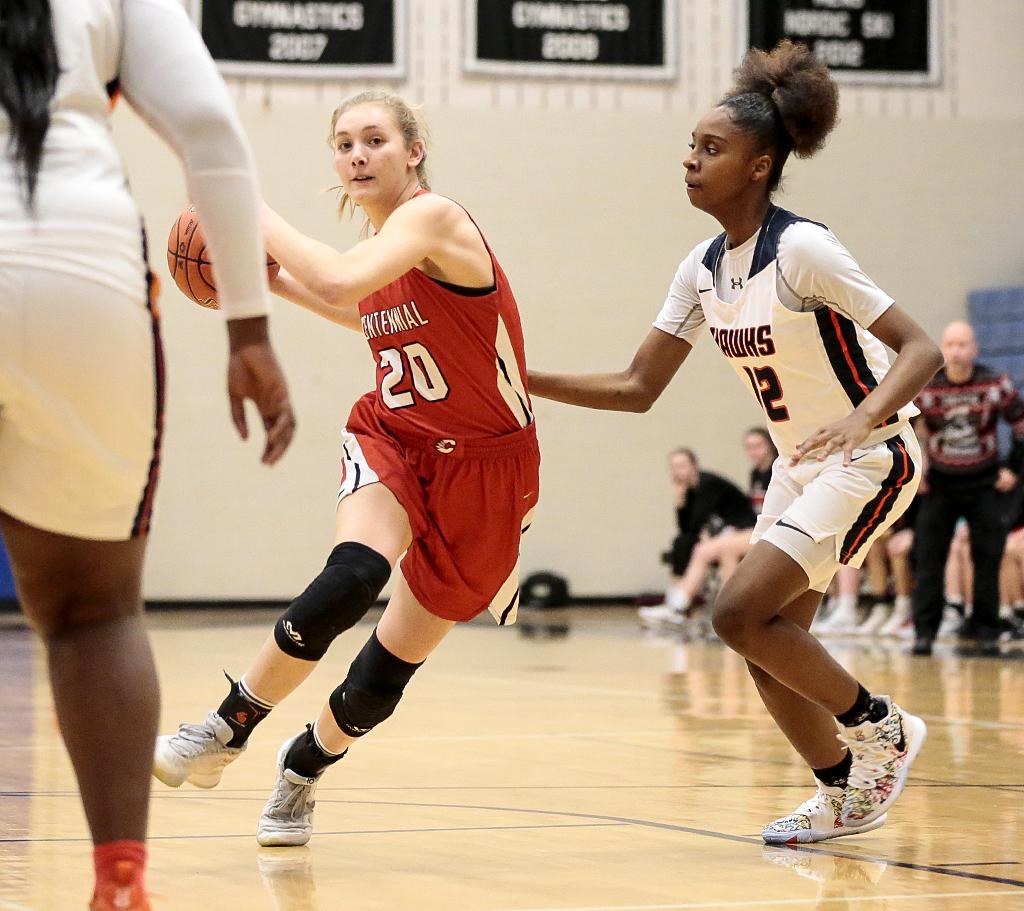 Double-doubles have been the norm so far this season for Jenna Guyer, Centennial's junior center who averages 17 points and 14 rebounds per game.

That trend continued Friday as Guyer, who stands 6-foot-2, recorded 18 points and 18 rebounds in the Cougars’ 61-49 defeat of Robbinsdale Cooper in the 2019 Roseville Holiday Girls’ Basketball Tournament.

The Cougars (8-1, 1-0) got things going early with Guyer tallying four points in the first three minutes. She finished the first half with 14 points.

The Hawks (6-2, 0-0), however, countered with fast-paced play and got the game to a 26-26 deadlock at halftime. Cooper’s Meme Wheeler, who finished with 14 points and 12 rebounds, had six points in the first half.

Centennial, ranked No. 5 in Class 4A by Minnesota Basketball News, gathered a small lead early in the second half and never let go. Guyer continued her tear while seeing some of her teammates get in on the action. Junior guard Jodi Anderson scored 16 points, including 10 in the second half.

The Hawks continued to keep the game close but could not close the gap, despite junior guard Jayla Reliford supplementing Wheeler’s attack with 14 points of her own. 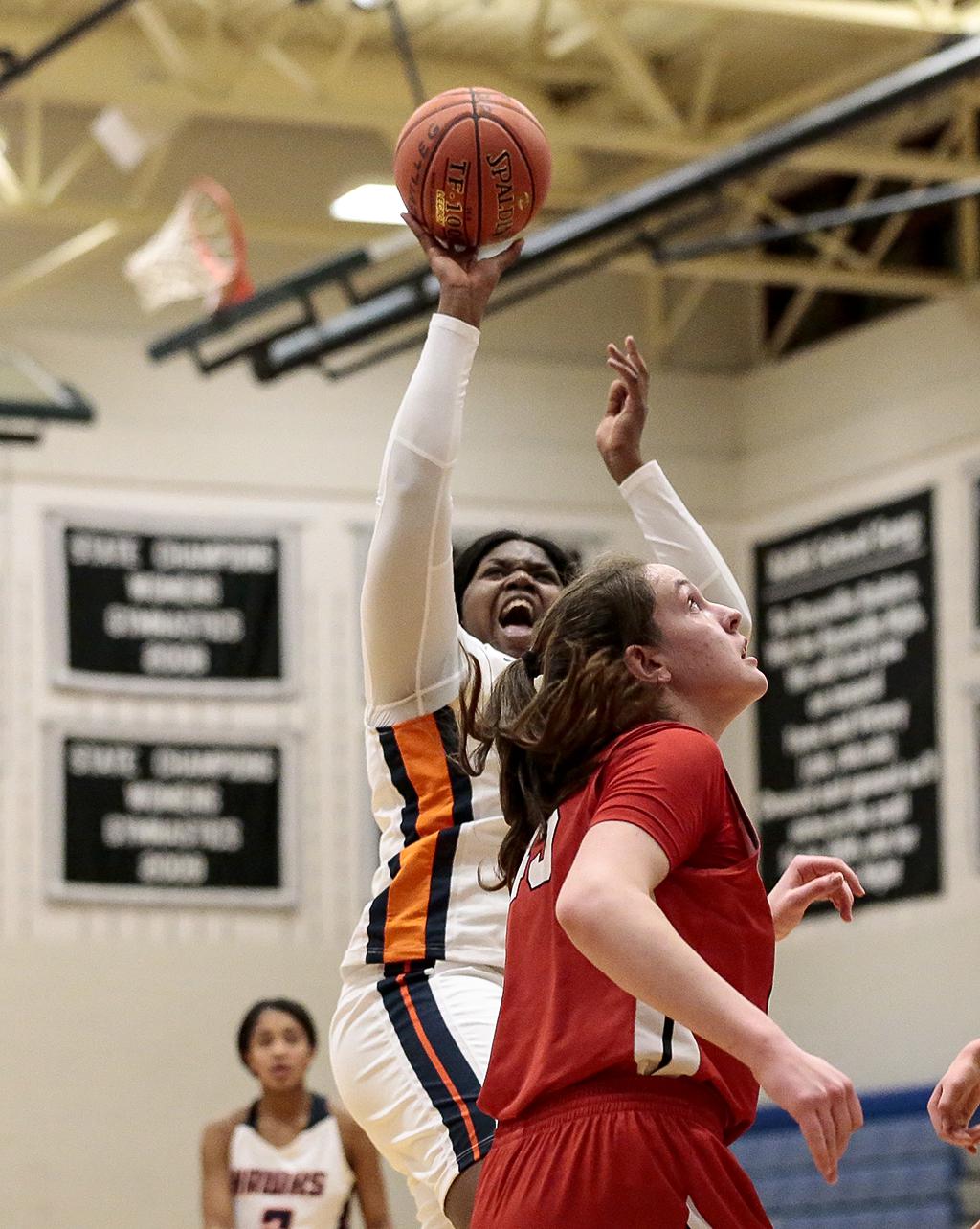 Robbinsdale Cooper's Meme Wheeler (21) shoots over the the head of Centennial's Jenna Guyer (45). Wheeler and teammate Jayla Reliford each scored a team-high 14 points. Photo by Cheryl A. Myers, SportsEngine