The Trojans cruised to victory behind 23 points from junior Jenna Johnson. 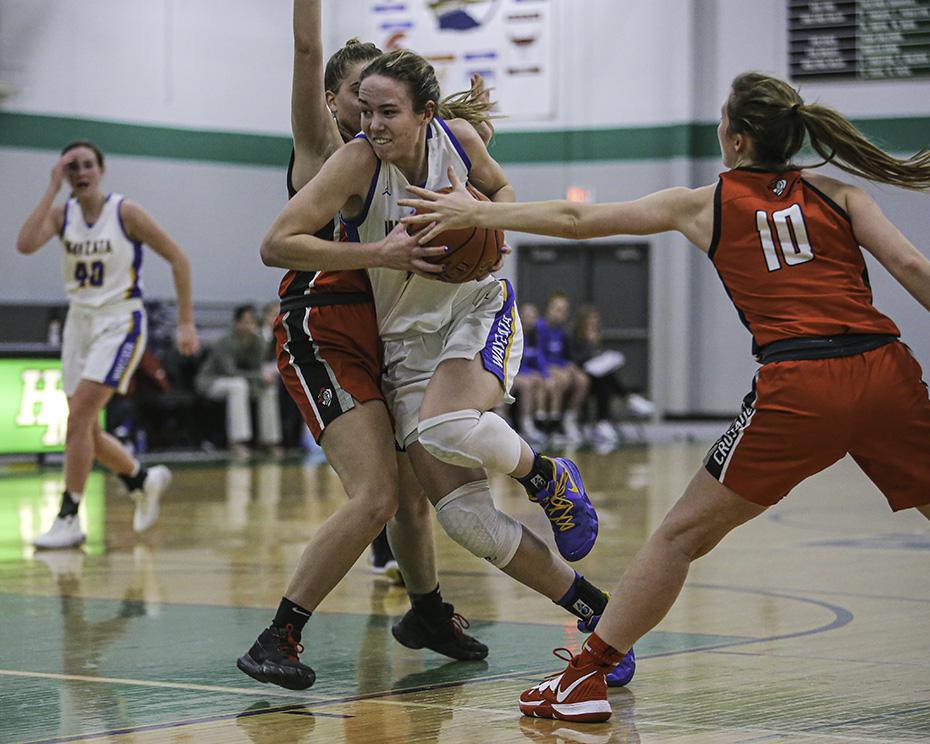 And for a time, it appeared the 6-foot-2 junior might reach that total in the first half of the contest against the Crusaders.

Johnson scored 18 in the opening half and finished with 23 for the game in helping the Trojans claim an easy 74-44 victory in their first-round contest of the Pioneers Holiday Tournament hosted by Hill-Murray. 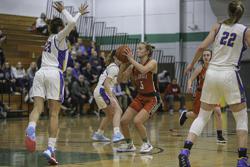 "I'm sure if you ask her, reaching 1,000 points would be the least of her concerns," Wayzata coach Mike Schmuacher said of Johnson. "She puts the team first. It will happen some time soon, and we'll celebrate when it happens."

Turns out Schumacher was right, Johnson said reaching the century mark is not terribly important.

"I didn't think about it," she said. "All I thought about was what I needed to do to help the team win. I had to score a lot in the first half, but in the second half I just had to play defense, rebound, and find open teammates — just do my job."

Johnson was not the lone offensive threat for Wayzata, ranked No. 4 in Class 4A by Minnesota Basketball News. Senior Annika Stewart finished with 16 points and 11 different players scored as the Trojans improved to 9-1 on the season.

With its victory, Wayzata — which won this tournament last season — will play the winner of the contest between Forest Lake and host Hill-Murray in a semifinal game starting at 7:15 Friday, while St. Croix Lutheran drops to the loser's bracket for a contest against the loser of the game between the Rangers and Pioneers that will begin at 3:45 p.m. Friday.

Both teams started Thursday's contest slowly, but Johnson got her team started by scoring the first eight points in a span of a little over a minute, and the Trojans were never challenged.

"As a coach, you feel good if your team is taking good shots — even if they're not going in," Schumacher said. "Sometimes they don't fall, so you have to be patient. We had some defensive breakdowns early that concerned me more than the missed shots."

And Wayzata just kept rolling, building a 17-7 advantage in the game's first eight minutes and leading by as many as 22 points before taking a 39-18 lead into halftime.

In the second half Johnson scored only five points, but she instead found Stewart inside, and the Nebraska commit scored 10 points in the first five minutes of the period.

"I knew they would double-team me more, so I was trying to figure out what I needed to do to help our team score," Johnson said. "It really takes the weight off, because we don't need to have one person score all of the points. If one person has an off night, a lot of people can step up and fill the void."

Wayzata eventually led by as many as 31 points, but St. Croix Lutheran continued to challenge the taller Trojans.

"Not only are they big and tall, but they come off the bench, too -- it just never stops," Crusaders coach Dave Mielke said. "I have only seven players, so as the game went on, it tired us out. It wore on us."

It also helped that Wayzata's tall team outrebounded St. Croix Lutheran 48-33 thanks in part to a whopping 22 offensive rebounds.

"They are so relentless on the boards, even when they miss a shot, they go to the basket and get the rebound," Mielke said. "There were times that we had them boxed out, but they would reach over us. They are so long -- and that affected us on passes, too, because they had long arms in the passing lanes.”

While reaching the 1,000-point plateau is nice, Johnson said it is nowhere near the top of her list of goals for this season.

"We want to win conference, win section, win state — all that kind of stuff," she said. "But at this point we are just working to be the best team we can be, and see where that takes us. If we do that, I would hope we would reach our goals."

And the good news for St. Croix Lutheran is that the Crusaders likely will not play a team with this combination of length and skill again this season.

"Maybe not ever," Mielke said. "The girls didn't shy away from [the challenge], but Wayzata's length and skill wore us out." 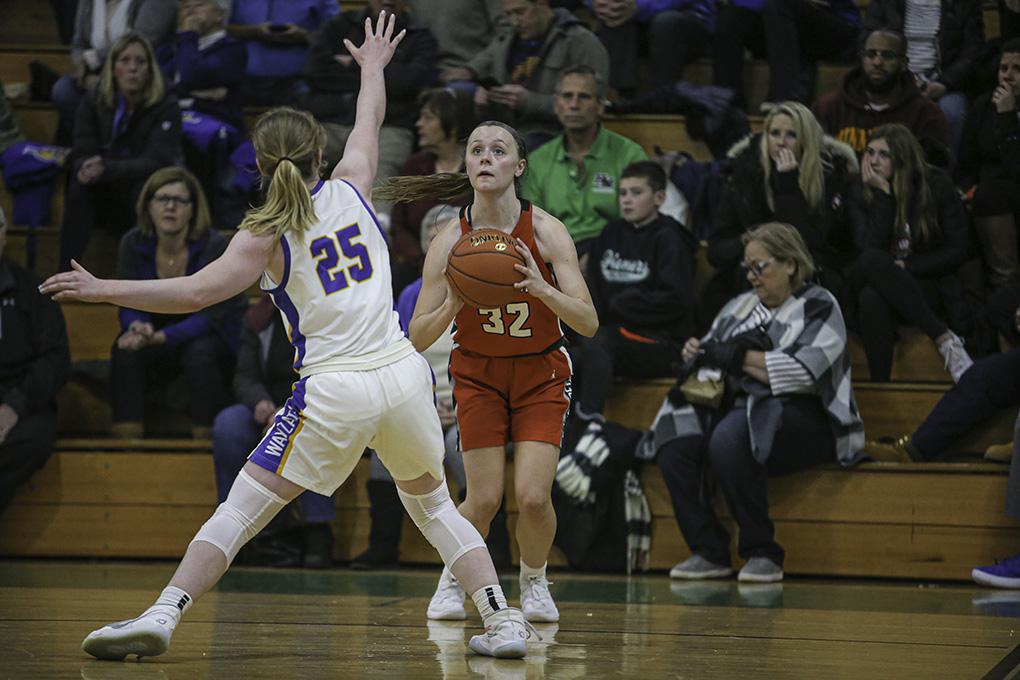 St. Croix Lutheran junior Kenna Moon (32) set up for a three-point shot as Wayzata's Brynn Sender defended. Moon made the shot for three of her team-high 12 points. Photo by Mark Hvidsten, SportsEngine

Wayzata's Jenna Johnson scored 23 points, including 18 in the first half, to help her team to a 74-44 victory over St. Croix Lutheran in the first-round of the Hill-Murray Girls’ Holiday Tournament Thursday.

Wayzata, ranked No. 4 in Class 4A by Minnesota Basketball News, saw Johnson, a junior, score the first eight points of the contest. The Trojans used several runs to lead by as many as 22 points in the first and take a 39-18 lead into the locker room at the half.

Wayzata eventually led by as many as 31 points in the second half before settling on the final margin.

With the victory, Wayzata will play the winner of the contest between Forest Lake and host Hill-Murray starting at 7:15 Friday, while St. Croix Lutheran drops to the loser's bracket for a contest against the loser of the game between the Rangers and Pioneers that will begin at 3:45 p.m. Friday.