Can Hopkins repeat the dream with another undefeated season?

The Royals have a well-known leader in Connecticut recruit Paige Bueckers, but they also have a youthful nucleus of Division I-coveted talent, including four players offered scholarships by the Gophers. 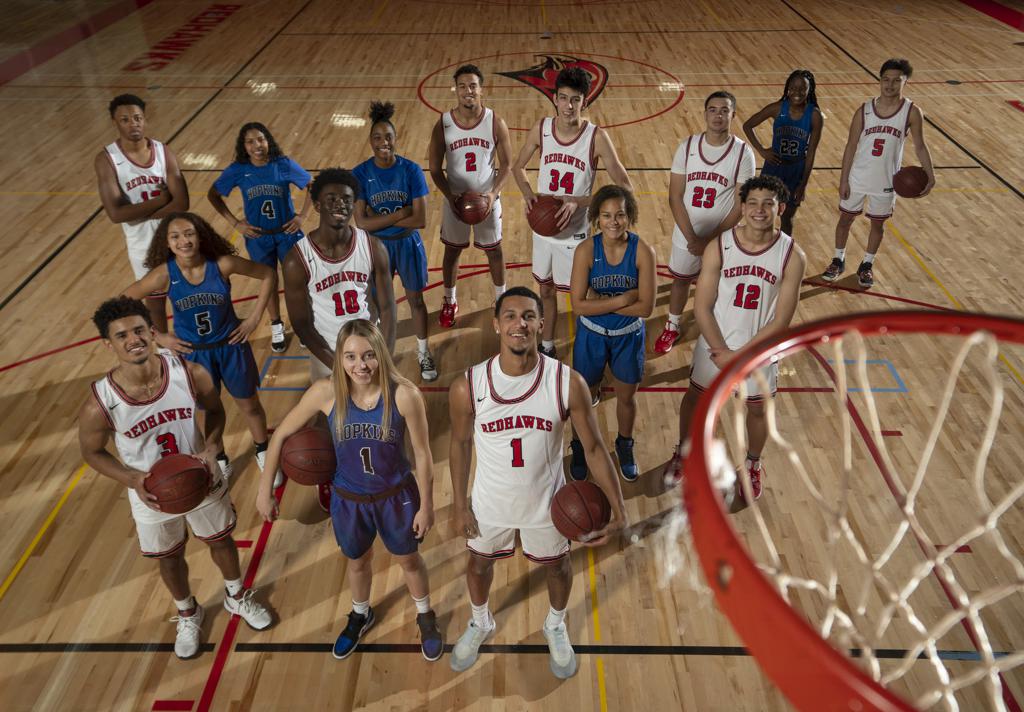 Minnehaha Academy and Hopkins players committed to or drawing interest from Division I schools came together for a photo at Minnehaha’s new gym. Photo: Jeff Wheeler * jeff.wheeler@startribune.com

Talent brings out lofty expectations for perennial girls’ basketball power Hopkins. It can be encouraging and motivating, yet overwhelming.

The pressure intensifies. It’s magnified daily, whether it be at practice or in a game. It’s a constant battle to make sure it doesn’t consume you.

That’s what Class 4A, No. 1-ranked Royals face this season as it seeks to become the first large school to post back-to-back unbeaten seasons in state history.

“It’s not easy when the bar is set extremely high,” said Hopkins coach Brian Cosgriff, whose teams have won an average of 27 games per year in his 20 years leading the program. “Along with it comes plenty of pressure.”

The Royals opened the year ranked No. 3 in the country according to the USA Today preseason rankings. They are 150-9 over the past five seasons.

“We really don’t care about rankings,” Hopkins senior guard Kayhla Adams said. “We enjoy playing together as a team, and want each other to succeed. Our bond is unbreakable.”

The Royals’ most recent success directly correlates with senior guard Paige Bueckers joining the starting lineup as an eighth-grader. The Connecticut recruit is the top-ranked player in the nation for the class of 2020 by HoopGurlz, a national recruiting website.

“Paige might be the best girl ever to play high school basketball in Minnesota,” Cosgriff said of the school’s all-time leader in career points, assists and steals. “She is the complete package. She is our coach on the floor.”

The Royals also have the No. 8-ranked player in the country in the class of 2022 in 6-4 sophomore forward Maya Nnaji. Her brother, Zeke, is a standout at Arizona.

Add in the likes of senior guard Adams, sophomores Amaya Battle and Alayna Contreras, and freshmen Sunaja Agara and Taylor Woodson, and you just might have the most talented group of girls’ players all-time. The Gophers have offered scholarships to Agara, Battle, Nnaji and Woodson.

“One person can’t win a state championship, but a team can,” said Adams, who has yet to decide on a collegiate destination. “We really don’t care about the accolades anybody gets individually.”

It’s a group that compares favorably to St. Paul Central’s 2007 unbeaten state champion, often regarded as the state’s best team. It successfully defended its state title with a 28-4 record the next year.

“Both teams were talented, but the first team was the best group I’ve ever coached,” said former Minutemen coach Willie Taylor, who now coaches Stillwater, which fell to Hopkins 74-45 in the state finals last season. “It’s tough to compare our 2007 team to Hopkins now. They are still young, and we don’t know how good they might become.”

Taylor’s back-to-back state champions were comprised basically of upperclassmen. The only exception was Theairra Taylor, who was a sophomore in 2007. She went on to play at Iowa.

“The biggest thing is still the phrase: There is no I in team,” Willie Taylor said. “Once all the players understand that is when you become really good. It’s all about timing.”

Like the Royals, St. Paul Central had an outstanding guard running the show in Angel Robinson. She went on to Marquette and currently is playing professionally in Spain.

Robinson was also joined in the starting lineup by former Gopher guard Kiara Buford and Marquette/Indiana forward 6-2 Georgie Jones. They also had another Division I talent coming off the bench in Ebony Black.

“I think we flew under the radar as far as being one of the top teams in the country,” Robinson said. “Our talent was overlooked a little bit. We didn’t have social media to help us out like the way it is now.”

Willie Taylor is quick to point out that Black was the key to pushing the program to being elite.

“Angel drove the car but once Ebony accepted her role as our sixth player, we became really good,” Willie Taylor said. “Our practices were entertaining and competitive. Every one of those players could have made the argument that they were the best player on the team.

“The biggest thing though is getting everybody to play together. They all need to be on the same page, and have the same goals.”

Even with all that talent, life wasn’t easy for Willie Taylor at the helm.

“Those were the toughest years coaching in my life,” Willie Taylor said. “The jealously stuff really bugged me a lot. I’ve matured since then and don’t get caught up in that now.”

Both coaches are driven by success.

“We are striving for perfection, every practice and every game,” Cosgriff said. “I feel the pressure. I’m competitive, and want us to be great.”

Cosgriff determines greatness at the end of the season.

“I base everything on championships, and this group only has one,” Cosgriff said. The Royals, before winning a state title last season, were the state tournament runner-up the previous three years.

He noted that the Coffey sisters, Nia and Sydney, led the Royals to three consecutive state championships from 2011-13 and went 91-4 during that span.

“Those teams were mostly made up of seniors, too,” Cosgriff said.

Can his current group — a youthful nucleus with a star senior, become part of the conversation as one of — if not the best — in state history?

“They’ve only had one good year,” Cosgriff said. “It might be a better conversion at the end of the season.” 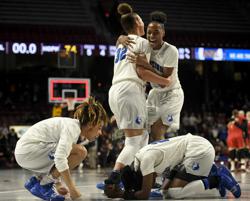