The trio of Francesca Vascellaro, Kassandra Caron and Rachel Kawiecki scored a combined 51 points to help the Stars defeat the Redhawks. 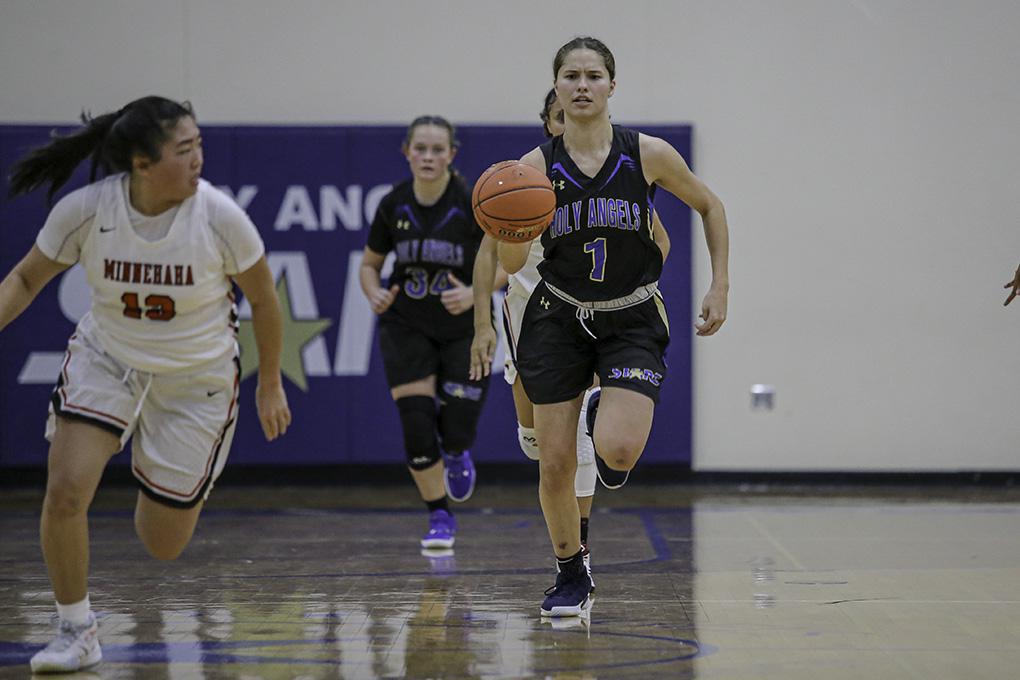 Francesca Vascellaro (1) led a break in the second half of Holy Angels' 97-55 victory over Minnehaha Academy. Vascellaro scored 16 points and reached 1,000 for her career. Photo by Mark Hvidsten, SportsEngine

With 9:14 remaining in the first half, she accomplished that feat.

The junior standout connected on a turnaround jumper, giving Holy Angels, ranked No. 3 in Class 3A by Minnesota Basketball News, a 25-18 lead over Minnehaha Academy in what would become a 97-55 blowout victory in Richfield for the defending Class 3A, Section 3 champion.

“I don’t think it has really settled in yet,” Vascellaro said. “ I’m so proud of what I have done so far, and I couldn’t have done it without my teammates.”

Vascellaro, who finished with 16 points and 10 rebounds, added that having the support of her teammates has allowed her to have so much success. 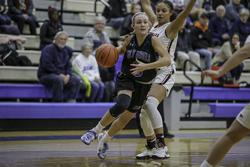 One of those teammates is Rachel Kawiecki, who seemed to be in sync with Vascellaro Tuesday. Kawiecki credited the duo’s many years of running up and down the court together as the reason for their success.

“I have been playing with her since third grade,” Kawiecki said. “We’ve played Shooting Stars together, and I have loved seeing her grow up and become the player she is.”

As for what makes Vascellero so valuable, Kawiecki, who totaled 17 points and nine rebounds, said her teammate’s court awareness is unparalleled.

“She sees the floor really well, and if she is off one night, she’s always available to get the open pass to one of us,” Kawiecki said.

“She’s enthusiastic,” he said. “Her energy carries over to the other players and she is a competitor; she goes 100 miles per hour.”

Woods stated Vascellaro’s uniqueness as a player stems from how she is seemingly able to jump higher than anyone on the floor to corral rebounds.

“She jumps and explodes, she gets a ton of rebounds, and backs that up with her leadership,” he said.

It was more the same in the second half. Holy Angels pushed the pace at every opportunity, and had very few possessions where its offense had to slow down and set up.

“Our game plan is if we don’t have to use it, (offensive set) we’re not going to use it,” Woods said, adding that he uses 10 players every game, with each of them having an ability to score.

“There’s no telling which one of those 10 can score — they all can score — so we are going to push it as much as we possibly can, because we can wear teams down and get into their second unit,” he said.

The game plan worked, as Minnehaha Academy, the defending Class 2A state champion, looked tired, using just eight players throughout the game and relying on the three-point shot.

The No. 8-2A Redhawks started the game cold and sloppy, turning the ball over. Their first two-point basket came with just 5:49 left in the first half, and they were unable to catch up to the Stars.

Mia Curtis led Minnehaha Academy (2-2, 0-0) with 18 points and five rebounds, while Tanna Gallo was one of the few Redhawks who shot well from beyond the arc, connecting on a game-high five three-pointers to finish with 18 points.

The final result may surprise some, especially since Minnehaha Academy lost to Holy Angels 62-60 last year.

Woods credited maturity and depth as the biggest reason for the change for the Stars since last year’s contest.

“We are way deeper than last year, and we are all a year older, and that makes it huge,” he said. “Their confidence is super high.” 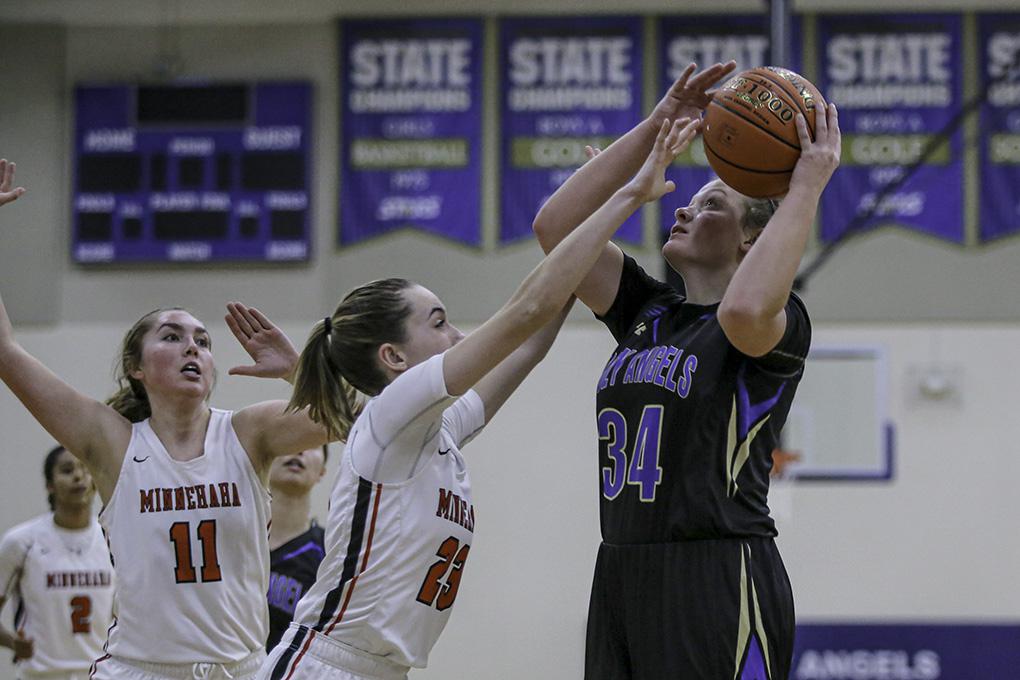 Rachel Kawiecki (34) got her shot off against Minnehaha Academy's Kate Pryor (23). Kawiecki had 17 points and nine rebounds for Holy Angels. Photo by Mark Hvidsten, SportsEngine

Holy Angels ran past Minnehaha Academy 97-55 in a battle of Class 3A and 2A elites on Tuesday night at the Academy of Holy Angels in Richfield.

Minnehaha Academy (2-2, 0-0) relied on three-point shooting early on, with its first two-point basket coming with just 5:49 left in the first half.

Mia Curtis tallied 18 points and five rebounds to pace the Redhawks, who are ranked No. 8 in Class 2A by Minnesota Basketball News, while Tanna Gallo added 18 points, while knocking down five three-pointers.