Four Cougars scored in double digits, led by Cloey Dmytuk who had a game-high 20 points. 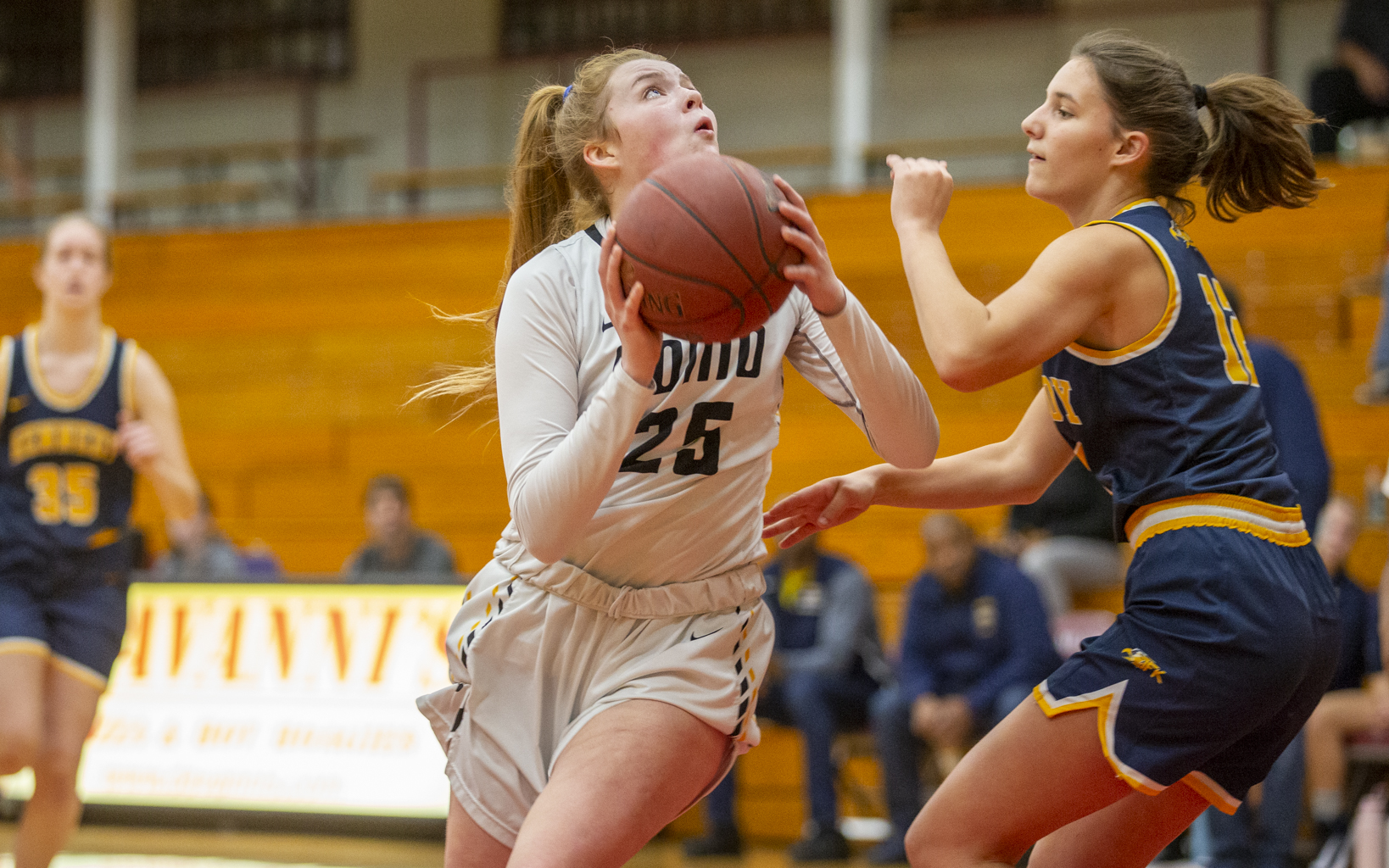 St. Paul Como Park's Cloey Dmytruk (25) looks for space on a lay up as Bloomington Kennedy's Isabelle Miller (12) defends. Dmytruk led the Cougars with 20 points in their 80-40 over the Eagles Saturday at Hamline. Photo by Jeff Lawler, SportsEngine

There was some bad news to come from St. Paul Como Park's 80-40 victory over Bloomington Kennedy in the Pat Paterson Thanksgiving Tournament held at Hamline University's Hutton Arena Saturday.

Well, at least it was bad news for the Cougars' forwards and centers.

That was the only challenge for the Cougars, who are ranked No. 4 in Class 3A by Minnesota Basketball News, in Saturday's one-sided win, as they jumped out to a 10-3 start and never looked back.

Como Park was led by sophomore Cloey Dmytuk, who finished with a game-high 20 points, while fellow sophomores Ronnie Porter, Demya Riley and Kaylynn Asberry each added 11.

On Saturday, the Cougars were looking to bounce back from a 77-54 Friday loss to No. 9-4A St. Michael-Albertville. Dmytuk said it was a setback that should help the Cougars long-term.

"We're a successful team, and sometimes we need a reality check," she said. "It helps us figure out what we need to do to get better and focus on that."

One thing the Cougars did well Saturday against Bloomington Kennedy was utilizing a stifling full-court press to generate 20 first-half turnovers.

"We're an athletic team, so it's hard for teams to get past our trap if we're playing our best defense," Porter said.

As for the offense, Como Park (3-1, 0-0) didn’t shoot well, but 15 offensive rebounds in the first half extended a number of possessions.

"One thing coach emphasizes is rebounding, because our team is littler than the teams we play," Dmytuk said. "And we need to get every loose ball possible, because those are more opportunities for us."

The rebounding and turnover advantage allowed the Cougars to lead by as many as 23 points in the first half. The Eagles, however, scored the final seven points of the half to cut the deficit to 43-27 going into halftime. The Cougars then roared to a 15-2 start in the second half and were never challenged.

"They outmuscled us, and that's about being a young team that's learning how to be physical," said Bloomington Kennedy coach Quintin Johnson of the rebounding struggles. "And we'll learn how to handle that pressure. When the other team commits four people to trapping the ball, once you get it past them you'll have numbers. But we're facing this stuff for the first time."

Freshman Ashlee Burchette led the Eagles with 14 points, while senior Kiera Cox added nine. All but 13 of the team's points were recorded by sophomores, freshmen and one eighth-grader.

"It's all about the end of the season — and getting better," Johnson said. "I love bringing my girls to this tournament at Hamline and testing them. We've got a week before our next game, so we can get back to the gym and take a step forward."

One of the positives Johnson took from his team's performance was the positive attitude the Eagles (0-3, 0-0) carried throughout the tournament, which included a 78-51 loss to Orono on Friday.

"We weren't barking at one another, and that's key when you're learning from early season losses," he said. "You have to stay together as much as possible."

And the final result?

"I have to go break the news to the post players that they lost by three," Gray-Lawson said with a smile. 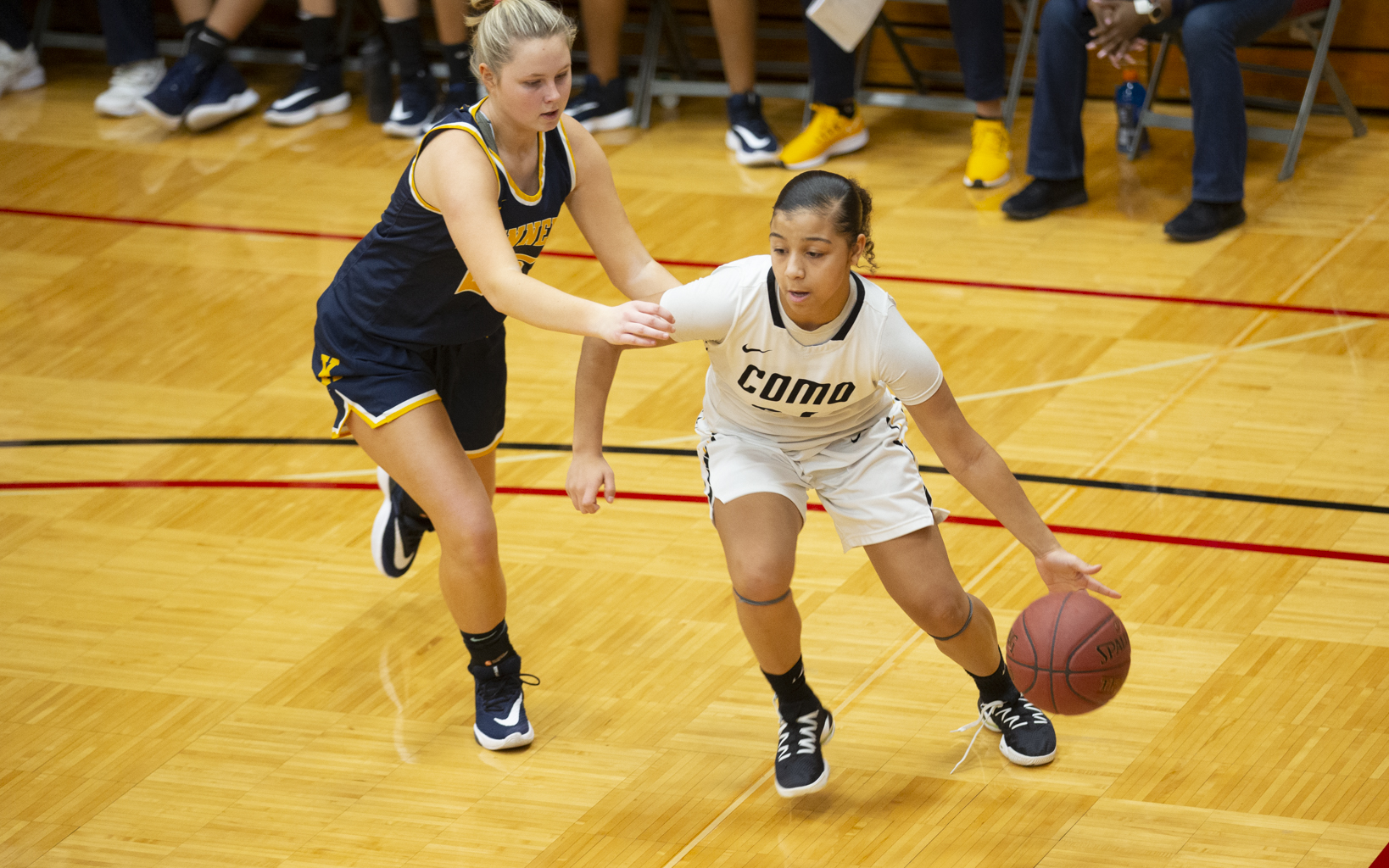 The Cougars, who are ranked No. 4 in Class 3A by Minnesota Basketball News, had four players finish in double figures. Cloey Dmytuk led all scorers with 20 points, while fellow sophomores Ronnie Porter, Demya Riley and Kaylynn Asberry each had 11.

Como Park then burst out of the second-half gates with a 15-2 run over the first five minutes and was never challenged the rest of the game. 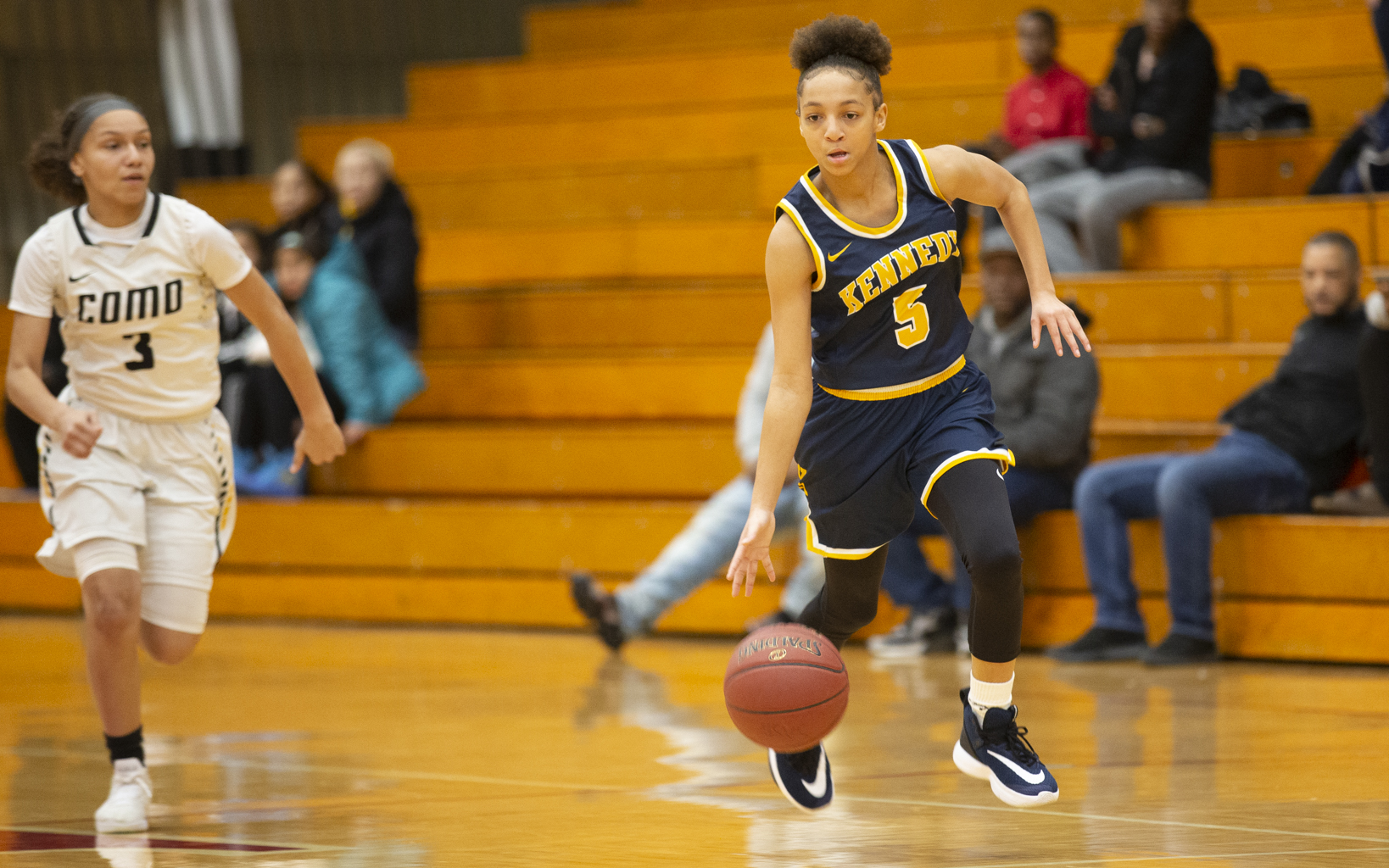 Bloomington Kennedy's Ashlee Burchette (5) races down the court on a fast break against St. Paul Como Park Saturday. Burchette had 14 points as the Eagles fell to the Cougars 80-40 at Hamline University. Photo by Jeff Lawler, SportsEngine