Hopkins picks up right where it left off, cruising to win over Becker

The Royals' Maya Nnaji led all scorers with 19 points and picked up 12 rebounds as the reigning Class 4A champs return to action. 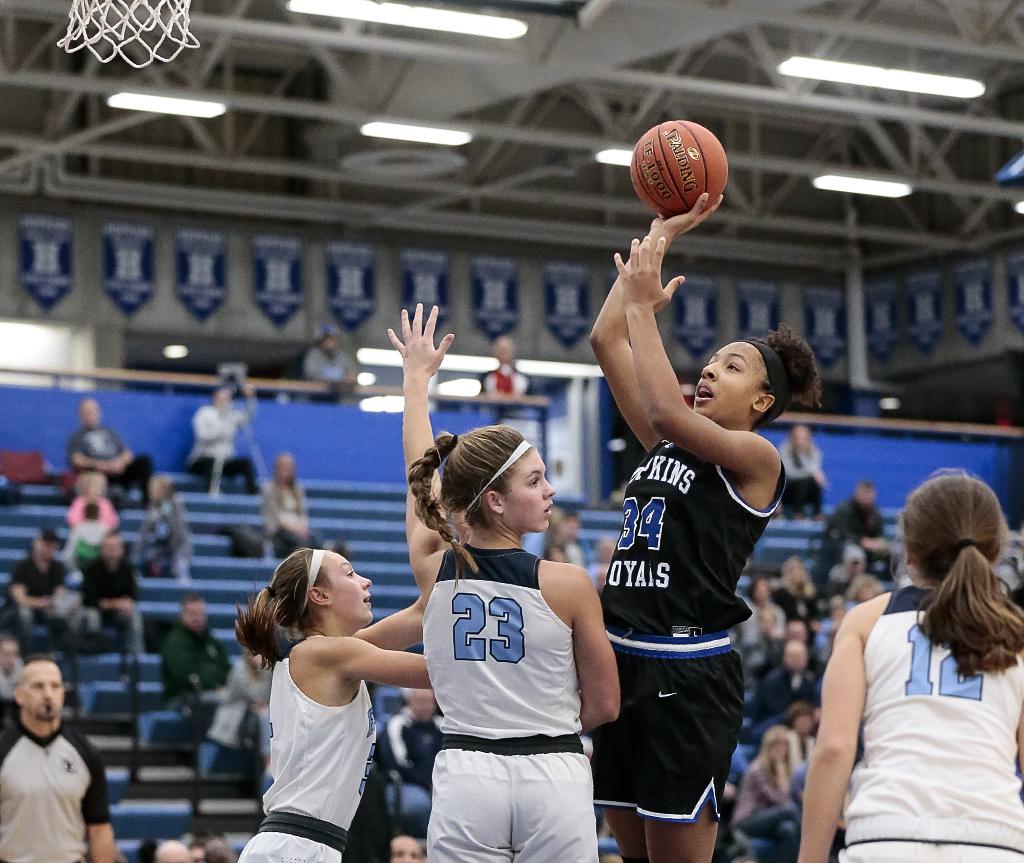 Hopkins' Maya Nnaji (34) shoots the ball over Becker's Megan Gamble (23). Nnaji led all scorers with 19 points, helping the Royals cruise to a 77-39 win over the Bulldogs. Photo by Cheryl A. Myers, SportsEngine 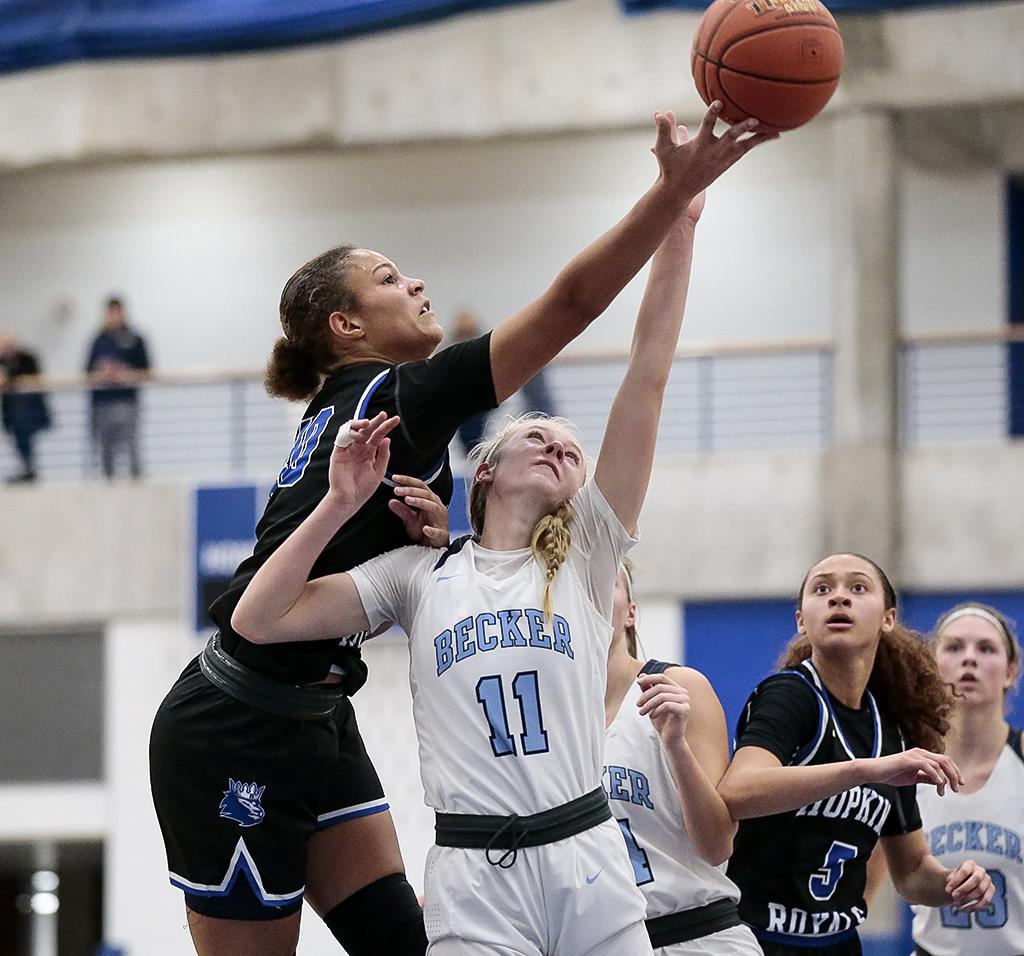 Hopkins' freshman forward Taylor Woodson (20) competes for a rebound with Becker's Adeline Kent (11). Woodson tallied 15 points in the Tip Off Classic on Saturday night. Photo by Cheryl A. Myers, SportsEngine

The last time Hopkins lost a game was 616 days ago, when the Royals fell to Eastview in the Class 4A state championship game on March 17, 2018. Since then, the Royals (1-0, 0-0) have won 33 straight, and if they play like they did in tonight’s 77-39 victory over Becker, that streak will continue for a while.

So what is it that keeps Hopkins successful year after year, seamlessly adding more talented young players?

“Honestly, it’s just luck, it is what it is,” Hopkins coach Brian Cosgriff said, referring to the amount of young talent he has on this year’s team and what contributes to them continuing to help lead Hopkins to successful seasons.

It may be better to be lucky than good, but Cosgriff’s Royals, ranked No. 1 in Class 4A by Minnesota Basketball News, have many strengths, which includes the senior leadership of Paige Bueckers and KK Adams, who can help the younger players on the roster mature. 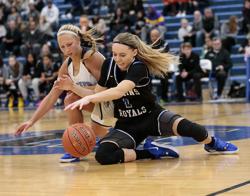 “I’ve been here for a long time, I think I’ve seen almost everything basketball can throw you at the high school level, and KK as well. Knowing that me and her have gone through it all and seen it all, we know how to help the younger kids,” Bueckers said. “It helps them a lot to have someone to look up to and talk to them through their process.”

They both brought that leadership on to the court Saturday to help set a tone at the start of the season. Bueckers filled up the stat sheet with 14 points, four rebounds, eight assists and seven steals, but Cosgriff was eager to point out the play of Adams.

“I thought KK Adams did a great job tonight, she got in a little foul trouble, but I thought this was one of the best games of her career defensively,” Cosgriff said.

Before fouling out, Adams finished with five points and two steals, and when she went to the bench, Cosgriff embraced her and told her how great she played.

“I said it was one of the best games I’ve seen her play as a Royal, it really was. It didn’t have anything to do with her shooting, it had to do with her leadership, her team play, how hard she played. I was so proud of her, I really was,” he said.

Bueckers and Adams will be helping sophomores Maya Nnaji (19 points, 12 rebounds and two blocks) and Amaya Battle (13 points, three assists and four steals), as well as freshmen Taylor Woodson (15 points and six rebounds) and Sunaja Agara (seven points, six rebounds and two steals) handle big roles on a team with sky-high expectations. Through one game, it’s looking like they can handle those expectations.

The Bulldogs (0-1, 0-0) are returning their six leading scorers from last year’s team that made a run to the Class 3A championship game, including Megan Gamble, who led the No. 2-3A Bulldogs with eight points against Hopkins. 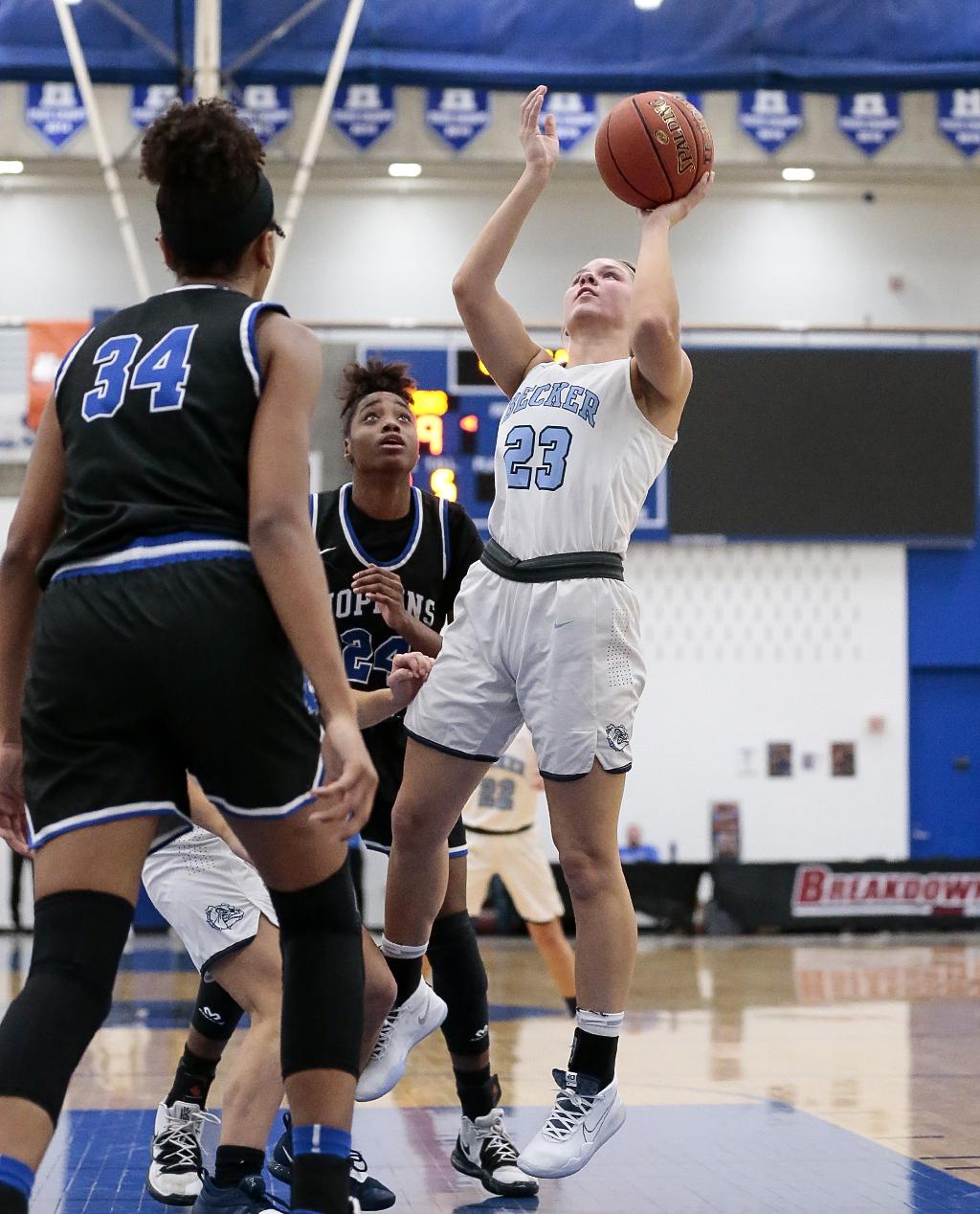 Megan Gamble (23) scored a team-high eight points as No. 2-3A Becker fell to No. 1-4A Hopkins 77-39 in the Breakdown Tip Off Classic at Hopkins High School. Photo by Cheryl A. Myers, SportsEngine

Hopkins opened its season Saturday with a 77-39 victory over Becker in the final game of the Breakdown Tip Off Classic at the Lindbergh Center in Hopkins.

The Bulldogs (0-1, 0-0) hung tough with the Royals in the first half, trailing by 16 at halftime. But the Royals, ranked No. 1 in Class 4A by Minnesota Basketball News, started the second half on a 21-4 run and took complete control of the game from there.

The strength of Hopkins defense led it to victory, with pressure early and often. The Royals (1-0, 0-0) forced 32 turnovers and came away with 17 steals. Paige Bueckers led the way with seven steals, while her backcourt partner, Amaya Battle, added four.

The Hopkins offense showed a lot of balance, as four different players scored 13 points or more. Maya Nnaji finished with a game-best 19 points, and she also had a game-high 12 rebounds.