Hopkins explodes in second half to rout upset-minded Stillwater

Trailing by six points early in the second half, the Royals roared back with a 44-10 run en route to a 74-45 victory to win the Class 4A title. 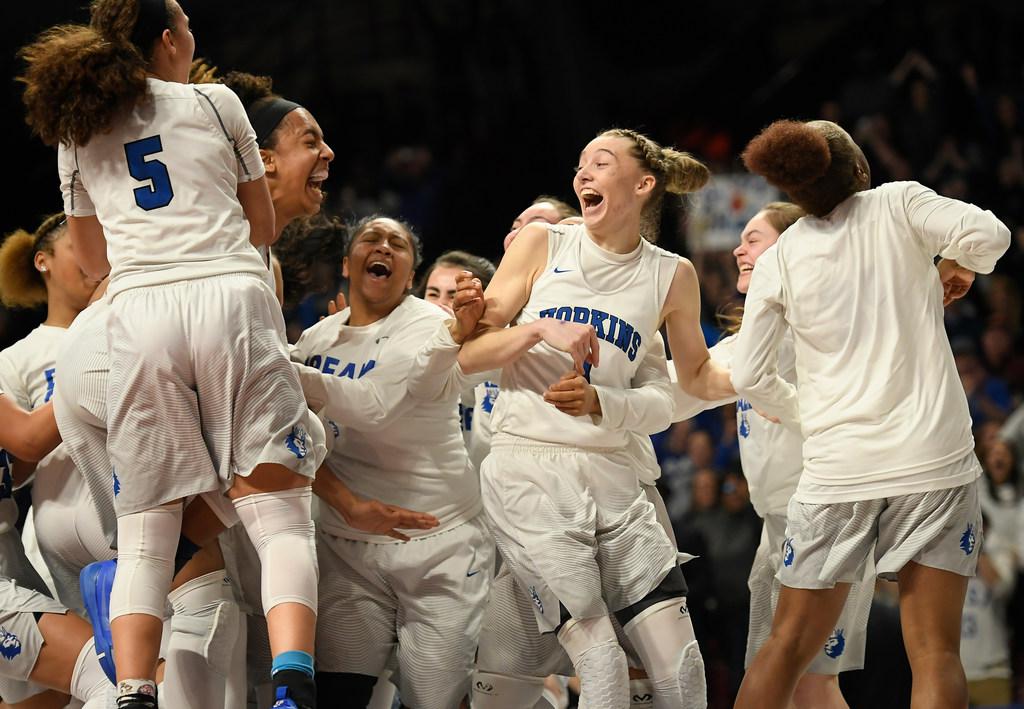 Paige Bueckers woke up Saturday feeling like doing anything but playing basketball.

“Paige was throwing up this morning and sicker than a dog,” Hopkins coach Brian Cosgriff said.

With the Class 4A championship game just hours away, the timing could hardly have been worse.

In the end, it mattered little. Hopkins used a 44-10 second-half blitz to rout Stillwater 74-45 to win the Class 4A state championship Saturday at Williams Arena. It’s the Royals seventh state championship since 2004, but the first time they’ve done it without losing a game, completing the season 32-0.

“This is like the best ever, I’m not going lie to you,” Cosgriff said.

Bueckers, Hopkins’ scintillating junior guard, said she never entertained thoughts of sitting the game out, no matter how ill she was feeling. There was too much at stake: a state championship, obviously, but also a reputation, with the Royals having lost title games the past three seasons.

“I didn’t care what was happening this morning, I was coming to play with my team,” she said. “Talk has been I came up short three years in a row. Is my legacy going to be I can get to the state title but I can’t win one?”

For a half, Stillwater played the role of dream-killer to perfection. With their leader hurting, the Royals took a while to adjust. The Ponies took advantage of their uncertainty, building a 29-27 halftime lead. It was the first time all season Hopkins had trailed at halftime.

“We just wanted to keep the intensity we had in the first half and keep playing together,” Stillwater guard Sara Scalia said.

After falling behind by six points early in the second half, Hopkins exploded. The Royals began to create the turnovers that have been their calling card, which results in a flurry of points. A quick 16-2 run gave Hopkins its biggest lead to that point, 46-37.

Scalia, who led Stillwater with 24 points, hit a three-pointer to give the Ponies a temporary reprieve. But Hopkins guard K.K. Adams followed with three straight three-pointers, effectively taking the fight out of the Ponies.

"This was a complete team victory," Cosgriff said.

Stillwater coach Willie Taylor said, “When they got that run, and they got excited, the team couldn’t hear me call plays. It was just too loud. It was tough.”

Afterward Bueckers was still feeling ill but enjoying every minute of the victory.

“I’m just so happy I could do this with my teammates,” she said. “I definitely didn’t play my best game, but there was no way I wasn’t going to be out here with my girls."

The question was legitimate, considering how thoroughly Hopkins had dispatched its 31 opponents ahead of Saturday’s Class 4A state championship game:

Can anyone beat the Royals?

Stillwater earned the season’s final chance to find out. Outside of Wayzata, the consensus No. 2 in Class 4A all season, a team that had lost to Hopkins three times, the Ponies were viewed as a team with a chance.

When presented with a certain angle of logic and reason, a Stillwater victory seemed possible. The talent was there, starting with a terrific backcourt of Sara Scalia and Alexis Pratt, who matched up well with Hopkins athletically. The size was present, too, in 6-2 junior post Liza Karlen. And Stillwater hangs its hat on its pressure defense, much like Hopkins.

For one half, Stillwater played the role of dream-killer to perfection.

But after halftime, when a two-point Stillwater lead had grown to six, Hopkins exploded. The Royals went on a 44-10 run, pulling away for a 74-45 victory in the Class 4A championship game.

The Royals (32-0) won the title for the first time since 2015 and the seventh time in coach Brian Cosgriff’s career. It was Hopkins’ first undefeated championship.

Against Stillwater, superstar Paige Bueckers’ contribution was a cantata of versatility. She let her teammates take equally important roles while she picked her spots.

Bueckers did score 13 points, but her myriad offensive skills were were simply a piece of the Hopkins puzzle.

When the night began, Stillwater’s hopes began to take root. Hopkins’ offense sputtered as Bueckers focused on getting the rest of the team involved. The Ponies took awhile to find their game legs, missing their first half-dozen shots from the floor, but Hopkins refused to take advantage.

Pratt scored Stillwater’s first basket at 13:24 of the first half, followed by five quick points from Scalia to take a 7-4 lead. Suddenly, Hopkins seemed less invincible.

Hopkins managed 9-0 run to take a 19-14 lead, but Stillwater, its confidence growing, fought back behind six points from Pratt and four for Scalia to take a 29-27 halftime lead.

Hopkins trailed at halftime for the first time all season, 29-27, and the possibility of Stillwater’s first state championship seemed tantalizingly real. Scalia had 14 points at the half, Pratt 10. Bueckers managed eight on just seven field goal attempts.

Hopkins looked more Hopkins-like after halftime. With Bueckers putting more emphasis on stopping Scalia, the Royals turned a 35-30 deficit into a 46-37 lead with a 16-2 blitz that was vintage Royals, turning rebounds and turnovers into quick points.

Scalia momentarily halted the run with a three-pointer, but K.K. Adams got hot, drilled three consecutive three-pointers to give Hopkins a 55-40 lead that ended Stillwater's dying hopes. 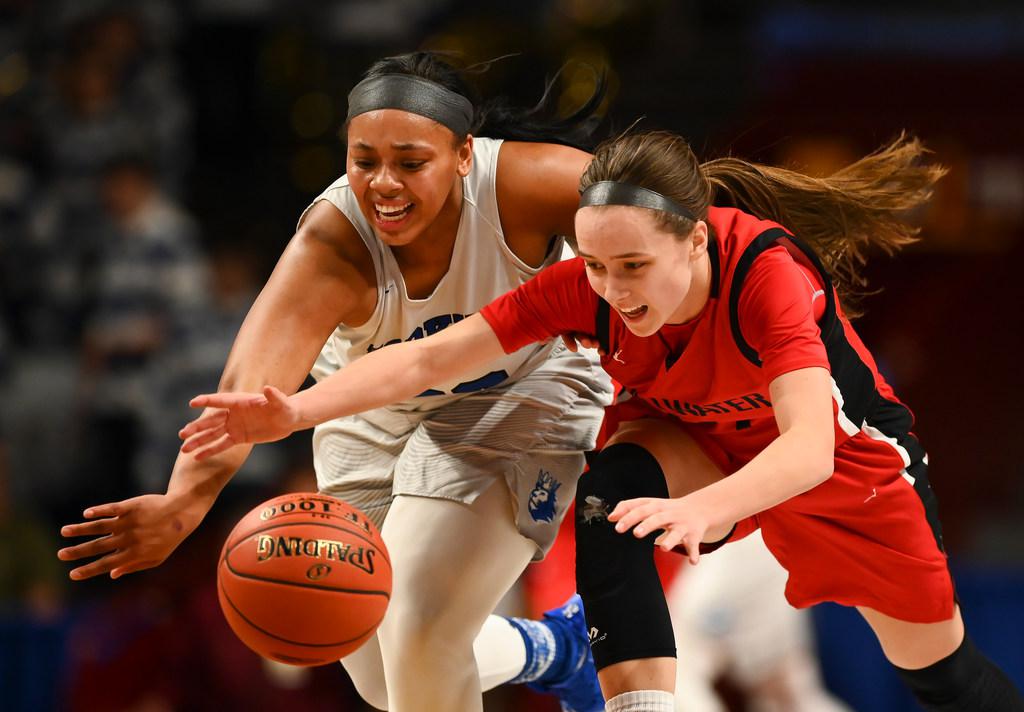