DeLaSalle too tall, too much for Becker, wins 3A championship

The Islanders withstood an early second-half surge by the Bulldogs and pulled away late for a 56-40 victory. 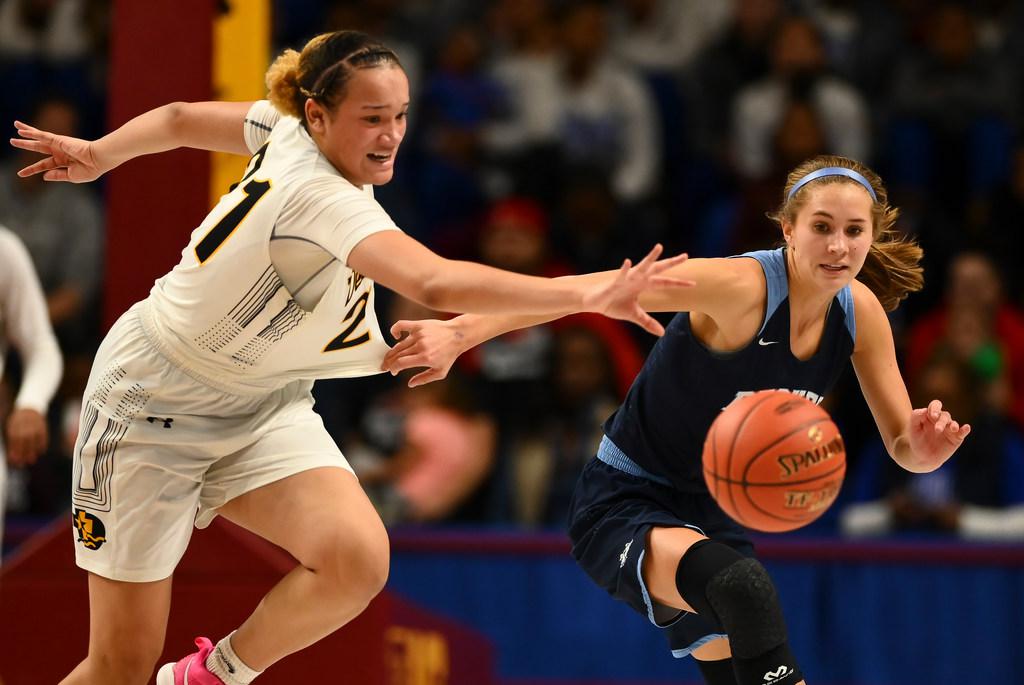 With a little more than one minute left and the outcome of the Class 3A basketball state championship settled, DeLaSalle senior Mary Claire Francois checked out of the game and into a celebratory hug with coach Tanysha Scott.

The two held tight to one another and began to shake with joy. The Islanders defeated Becker 56-40 and Francois, who entered the program as one of a half-dozen eighth-graders, went out a winner.

“She’s the one that really stuck through it and stayed,” Scott said. “I told her, ‘This is what we’ve been waiting for. This is what we wanted.’ ”

Francois, younger sister Nora and Nurjei Weems all started Saturday at Williams Arena and the trio of 6-footers asserted themselves at both ends. Their teammates did likewise. The length and active hands of DeLaSalle’s players brought inside scoring and harassment of Becker’s offense.

Dan Baird, coach of the No. 3 seed Bulldogs (27-5), brought in a mix of players’ fathers and Becker boys’ basketball players to Friday’s practice to simulate DeLaSalle’s size and quickness. But the real thing couldn’t be overcome.

“All five of their kids have long arms and are extremely active,” Baird said. “It was hard for us to get in a groove all game.”

The Francois sisters and Weems finished with a combined for 35 points on mostly put-backs and lob passes.

Becker finished the game 4-for-18 (22 percent) on three-pointers after making more than 50 percent of their threes in the quarterfinals and semifinals.

“We had chances to tie or take the lead but we didn’t capitalize,” said Baird, adding that his team’s 26.5 percent shooting percentage was a season low. “It seemed like throughout the entire season we were able to impose our will on other teams, and it got reversed today.”

DeLaSalle stood taller than the Class 3A field this season and effectively used its height at both ends of the floor in a 56-40 championship game victory against Becker.

No. 1 seed DeLaSalle (24-5) pulled away late from No. 3 seed Becker (27-5) as the upset-minded Bulldogs came up short on Saturday at Williams Arena.

DeLaSalle, a Minneapolis-based private school, led 31-22 at halftime. The Islanders built their advantage by starting their tallest lineup of the state tournament. A trio of 6-footers -- Nora Francois, sister Mary Claire and Nurjei Weems -- asserted themselves on offense and defense.

Defensively, the Islanders didn’t give Becker a moment’s peace. They invaded passing lanes and tipped balls away or made Becker players work harder to secure catches. They started with mostly man defense, shadowing Becker shooters on the perimeter and running occasional double-teams at guard Julia Bengtson.

DeLaSalle forced 11 turnovers in the first half and turned them into 14 points.

Becker finished the game 4-for-18 (22 percent) on three-pointers after doing much of its damage in the first two games from beyond the three-point arc. The Bulldogs made more than 50-percent of their threes in the quarterfinals and semifinals.

Bengtson and Courtney Nuest combined for 16 of their team’s first-half points.

Offensively, DeLaSalle’s inside game was once again tough to beat. The Islanders, who scored at least 20 points in the paint in the quarterfinals and semifinals, tallied 22 points inside in the first half. The Francois sisters and Weems combined for 18 points in the first half on a variety of put-backs and lob passes.

Becker showed life to start the second half with seven consecutive points. The surge, featuring an Adeline Kent three-pointer, cut the Bulldogs’ deficit to 31-29.

DeLaSalle, meanwhile, sat back in a 3-2 zone defense. Becker attacked the scheme well enough to stay within two possessions much of the second half but didn’t score enough to wrestle away the Islanders’ lead.

Young players throughout the lineup made the difference for both teams. Becker started four sophomores. DeLaSalle ran six freshmen through its rotation.

The Islanders’ depth shined throughout the three state tournament games. Going into Saturday, five different players had scored in double-digits – none more than once. The second unit added 30 points in the first two games.

Becker last won a Class 3A state championship in 2007. The Bulldogs’ opponent? DeLaSalle. The 41-39 victory was secured on a shot with 1.2 seconds left.

Check back later more on the game.