The Redhawks overcame a second-half deficit to defeat Caledonia 72-63 behind 29 points from guard Taytum Rhoades. 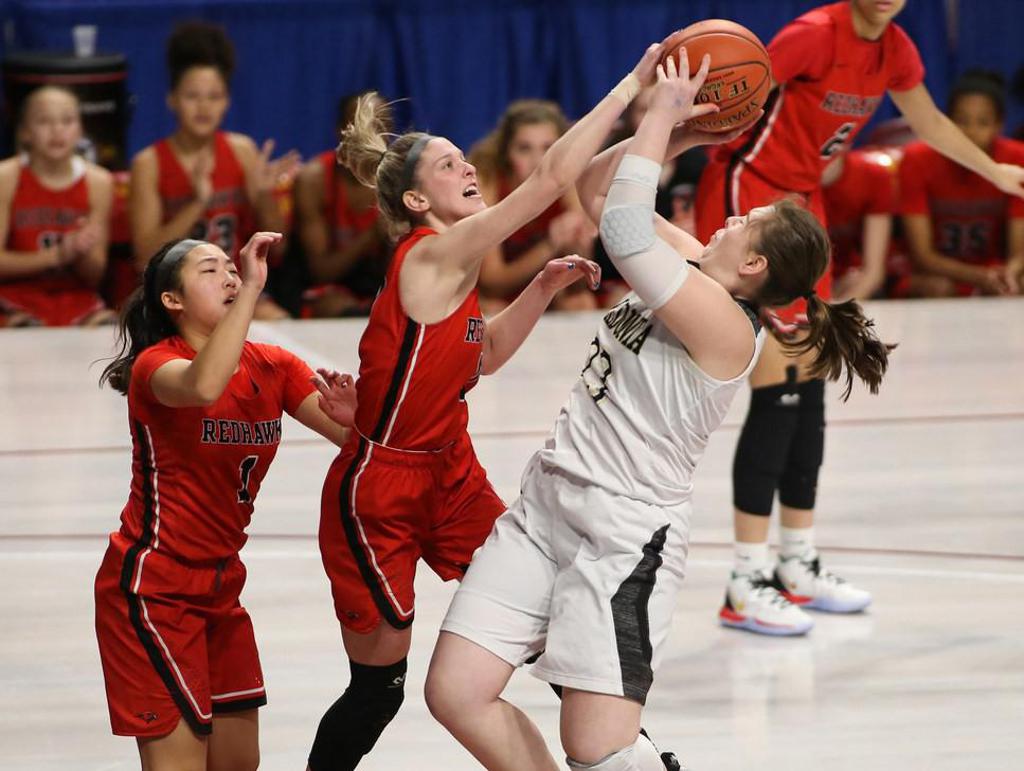 Caledonia guard Katie Tornstrom (23) went up for a shot as she was defended by Minnehaha Academy guard Taytum Rhoades (middle) and guard Tanna Gallo (1) in the first half. Photo: Shari L. Gross • shari.gross@startribune.com

About eight minutes remained, the deficit was six points, and their star guard and best shooter was on the bench, having fouled out.

Things could not have been more bleak for Minnehaha Academy.

Bleak, perhaps, but not hopeless.

The Redhawks fought back behind senior guard Taytum Rhoades, who scored 16 of her game-high 29 points in the second half despite playing with four fouls, lifting Minnehaha Academy to a 72-63 victory over Caledonia in the Class 2A championship game.

Minnehaha Academy (25-6) rallied without junior guard Mia Curtis, who fouled out at the 8:03 of the second half Saturday at Williams Arena, the most notable casualty of a game that had 44 combined fouls.

“If you had told me beforehand that Mia Curtis was going to foul out and we were still going to win, I would have said ‘Not a chance,’ ” said Minnehaha Academy’s first-year coach Matt Pryor. “But these girls stepped up in big-time moments in a big-time game and that’s what you need.”

Caledonia (26-5), which went into the game with a 22-game winning streak, used a zone defense to slow the Redhawks and attacked Minnehaha’s ball-pressure defense, getting its opponent in foul trouble.

“We were attacking and getting them in foul trouble, and we thought we had them where we wanted them,” he said.

What he didn’t expect was how the rest of the Redhawks filled the Curtis void. Junior guard Tanna Gallo bounced back from a miserable first half with energy and spunk, hitting two three-pointers, grabbing three rebounds and dishing two assists. Backup guard Kate Pryor scored all 10 of her points after halftime.

“They got hot. Tip your hat to them,” Sorenson said.

But the game, particularly the second half, belonged to Rhoades. Her ability to drive and score when needed and get Minnehaha Academy into its offense was key to the Redhawks’ victory.

“Credit to Taytum being able to go out and play with four fouls the way she played,” Pryor said.

Said Rhoades, “We had a chip on our shoulder from being here the past how many years (five), we had unfinished business. It’s amazing. Not many [players] get to end their high school career with a win.”

Despite battling foul trouble for the entire second half, resulting in the loss of their leading scorer with eight minutes left, Minnehaha Academy pulled away down the stretch to defeat Caledonia 72-63 on Saturday to win the Class 2A championship.

Point guard Taytum Rhoades scored 29 points, many while playing with four fouls, as the Redhawks fought back from a 46-40 second-half deficit at Williams Arena.

Much of the comeback was accomplished with guard Mia Curtis on the bench. Curtis hit five three-pointers in the first half to help stake the Redhawks (25-6) to a 33-27 halftime lead, but fouled out in the second half.

Ashley Schroeder scored 21 points and Katie Tornstrom had 19 for Caledonia (26-5).