The Warriors scored 13 unanswered points to rally from a 10-point deficit in a 65-55 victory over the Rams. 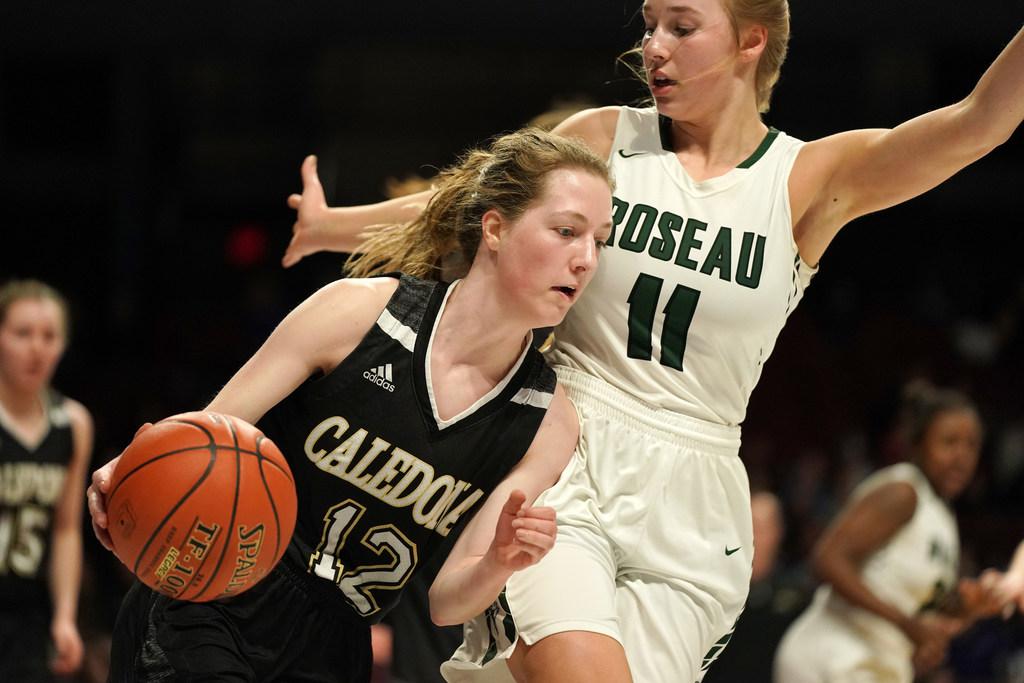 Caledonia trailed top-seeded Roseau by 10 with 12:17 left in the second half Friday after making just eight shots from the field over the game’s first 23-plus minutes.

The fourth-seeded Warriors went 6-10 from the field over the next 3:43 as part of a 13-0 run that helped them secure the lead for good.

Seniors Ashley Schroeder and Heidi Bolduan each scored four points during the stretch, and eighth-grader Alexis Schroeder hit a three-pointer as Caledonia (26-4) defeated Roseau 65-55 in the Class 2A semifinals at Williams Arena.

“I think we knew that eventually we’d get (the shots) to go in,” Ashley Schroeder said. “When we miss shots, we don’t … get down on ourselves a lot. We just realize we have to get it and get to the boards, instead of outside shots all the time.”

Caledonia made just one field goal over the final 11:45 of the first half but trailed by just eight at halftime, thanks to nine takeaways, defense and nine made free throws. The Warriors used a zone defense to limit Roseau’s high-scoring Borowicz sisters — senior Kacie and sophomore Katie — to just 12 points in the second half and finished with 20 takeaways overall.

“Our defense is what carries us,” Ashley Schroeder said. “It has been carrying us through this tournament.”

Schroeder, one of four senior starters, scored 12 points, including eight in the second half. Bolduan led the team with 24 points, while seniors Kaitlin Conniff and Katie Tornstrom added 11 and 13, respectively.

Kacie Borowicz, Roseau’s all-time leading scorer, led the Rams with 28 points, including a three-pointer that ended the 13-0 Caledonia run.

“Best years of my life,” she said of her time in the Roseau program, which included five consecutive state appearances. “Not the way I hoped it would end.”

Fourth-seeded Caledonia forced 20 turnovers and went on a 13-0 second-half run as it overcame a poor shooting start and defeated top-seeded Roseau 65-55  in the Class 2A semifinals Friday at Williams Arena.

The Warriors (26-4) trailed 43-33 before the run, which senior guard Ashley Schroeder capped with a layup with 8:35 left in the second half. It came after a first half in which Caledonia shot just 23 percent and made just one basket from the field over the half's final 11:48.

Senior Gabby Hoscheit secured the game for the Warriors with three free throws in the final minute.