Featuring a lineup with all five starters back from last year's Class 1A state tournament, the Vikings scored nine of the game’s final 12 points for a 55-50 victory. 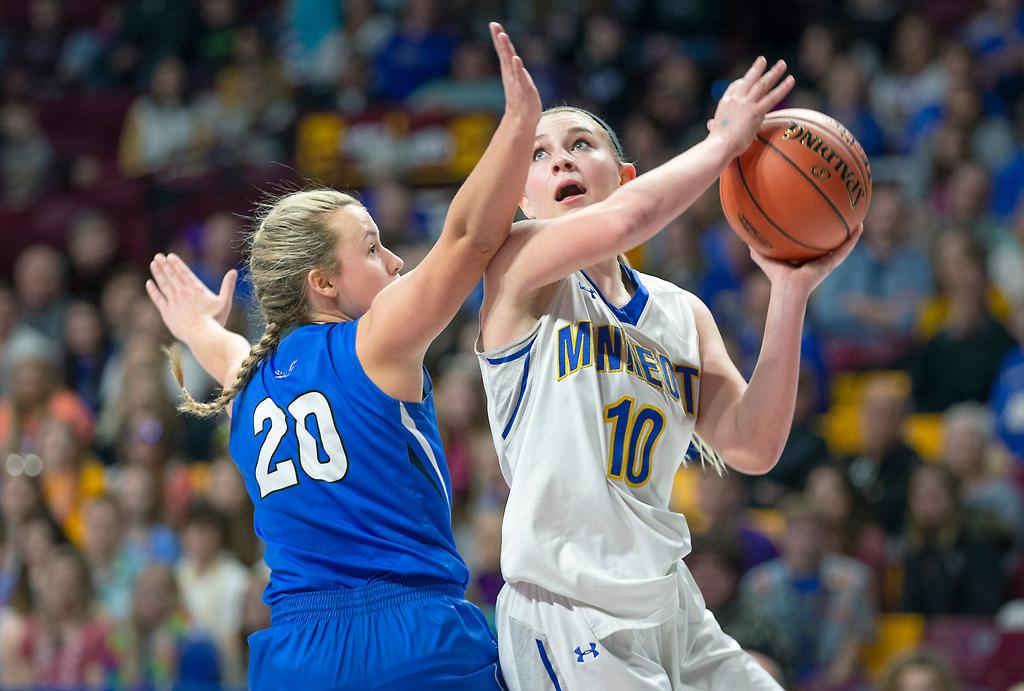 Minneota's Morgan Hennen drove to the basket while Heritage Christian's Taylie Scott defended in the second half of the Class 1A semifinal Friday at Williams Arena. Photo: ELIZABETH FLORES • liz.flores@startribune.com

Minneota and Heritage Christian were mirror images of each other. The difference-maker in their Class 1A semifinal matchup was a matter of experience.

The No. 1-ranked Vikings, with all five starters back from last year’s third-place squad, scored nine of the game’s final 12 points to pull out a 55-50 victory over Heritage Christian on Friday at Williams Arena.

“Having that experience was key,” Minneota coach Chad Johnston said. “When it came down to crunch time, they all stepped up.”

Sophomore guard Abby Hennen made six consecutive free throws, giving the Vikings (29-1) a 52-48 lead with 1 minute, 7 seconds left. She was 8-for-8 from the free-throw line and scored a game-high 21 points. She also had eight rebounds and four assists.

“I struggled on my free throws [Thursday],” said Hennen, who was 5-for-9 from the free-throw line in the Vikings’ 66-46 victory over Red Lake in the quarterfinals. “I had to focus more and be confident.”

Junior guard Kirstin Robbins’ basket with 5:17 left gave the No. 8-rated Eagles (27-3) a 47-46 lead. They wouldn’t make another basket until 20 seconds remained. Robbins finished with a team-high 15 points.

“Our defense in the second half was excellent,” Johnston said.

Minneota senior guard Morgan Kockelman limited Heritage Christian’s career scoring leader senior guard Taylie Scott to six points. Scott was 3-for-16 from the floor, including 0-for-5 from three-point range and didn’t get to the free-throw line. She also only had two assists.

“Morgan is always going to be on somebody’s No. 1 point guard,” Johnston said. “She did a phenomenal job on a great basketball player.”

Senior forward Emily Tostenson’s basket with 13:46 left gave the Eagles a 40-33 lead. An 8-1 run by Minneota tied it at 41-all, setting the stage for a seesaw battle until Hennen stepped to the line.

“They have the No. 1 ranking for a reason,” Heritage Christian coach Lori Crellin said.