The Ponies trailed by five at halftime but Gopher recruit Sara Scalia scored 20 of 22 points after the break to key a 65-52 victory over the defending Class 4A champions. 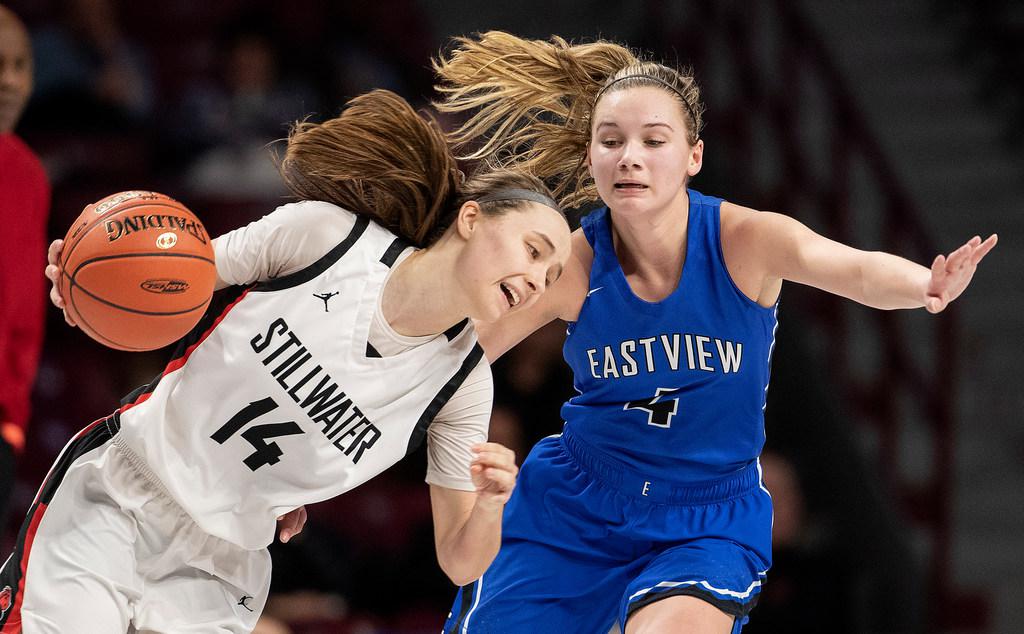 Sara Scalia (14) of Stillwater was defended by Emma Carpenter (4) of Eastview in the second half. Scalia, a future Gopher, scored 20 points in the half to spark the Ponies. Photo: CARLOS GONZALEZ • cgonzalez@startribune.com

With Gophers-signee Sara Scalia asserting herself on offense and her team playing the type of pressure defense that has been a hallmark all season, Stillwater rode a 20-4 run midway through the second half to a 65-52 victory over Eastview in the Class 4A championship game.

Through the first three halves of state-tournament play in the quarterfinals and semifinals, Scalia had not played up to her standards, making just five of her first 28 shots. That was a big reason Eastview led 30-25 at halftime Friday at Williams Arena.

“We were kind of playing nervous and scared, and I got on them a little bit,” Stillwater coach Willie Taylor said of his halftime message.

Scalia took the message to heart. With Stillwater trailing 32-25, she scored six consecutive points to cut the deficit to one.

“Any time Sara shoots the ball, I think it’s in,” Taylor said. “She’s been struggling a little bit, but she got her stroke back.”

Scalia’s sudden success seemed to energize her teammates. The Ponies’ pressure defense began to have an effect on Eastview, leading to turnovers and missed shots.

Scalia followed with a momentum-generating steal and basket, giving Stillwater its first lead since midway through the first half.

“That picked up our energy and got us to playing defense like we’re used to playing,” Taylor said.

A few minutes later, Stillwater (28-2) put the game away with a 10-2 run, getting four points each from Scalia and junior post Liza Karlen.

“We really worked well together in the second half,” Scalia said.

Karlen added 16 points for the Ponies and guard Alexis Pratt had 15.

Defending champion Eastview (25-6), appearing in its eighth consecutive state tournament, was led Lauren Glas with 14 points and Macy Guebert with 12.

Stillwater advanced to the Class 4A championship game for the first time.

It took a little more than a half of play, but Stillwater finally showed the rest of the state why it has been so highly regarded this season.

With Gophers signee Sara Scalia asserting herself on the offensive end of the floor and the Ponies playing the type of pressure defense that coach Willie Taylor has preached all season, they went on a 20-4 run midway through the season half to rally for a 65-52 victory over Eastview.

Through the first three halves of state-tournament play, Scalia -- Gopher coach Lindsay Whalen's first in-state recruit -- may have been trying too hard to show she deserved the scholarship, forcing things that weren't there. She had hit just five of her first 28 shots.

Things began clicking for Scalia in the second half.

With Stillwater trailing 32-25, Scalia went on a run by herself, scoring six consecutive points to cut the deficit to 32-31.

Her sudden success seemed to energize the entire Stillwater roster. The Ponies' pressure defense started to have an effect on Eastview, which started turning the ball over and missing shots the Lightning had made previously.

Junior guard Grace Cote, who had been Stillwater's best offensive player in the tournament before Scalia's second-half outburst, hit a three- pointer with 9:30 to go, tying the score 37-37.

Scalia followed with a steal and basket, giving Stillwater its first lead since midway through the first half.

After an Eastview basket tied the game at 39, Stillwater (28-2) put the game away with a 10-2 run, getting four points each from Scalia and junior post Liza Karlen.

Scalia finished with 22 points, 20 of them in the second half. Karlen added 16 points and a physical presence inside and lightning-quick guard Alexis Pratt had 15 points.

Stillwater, making its first state tournament appearance in 31 years, advances to the Class 4A championship game for the first time in school history. 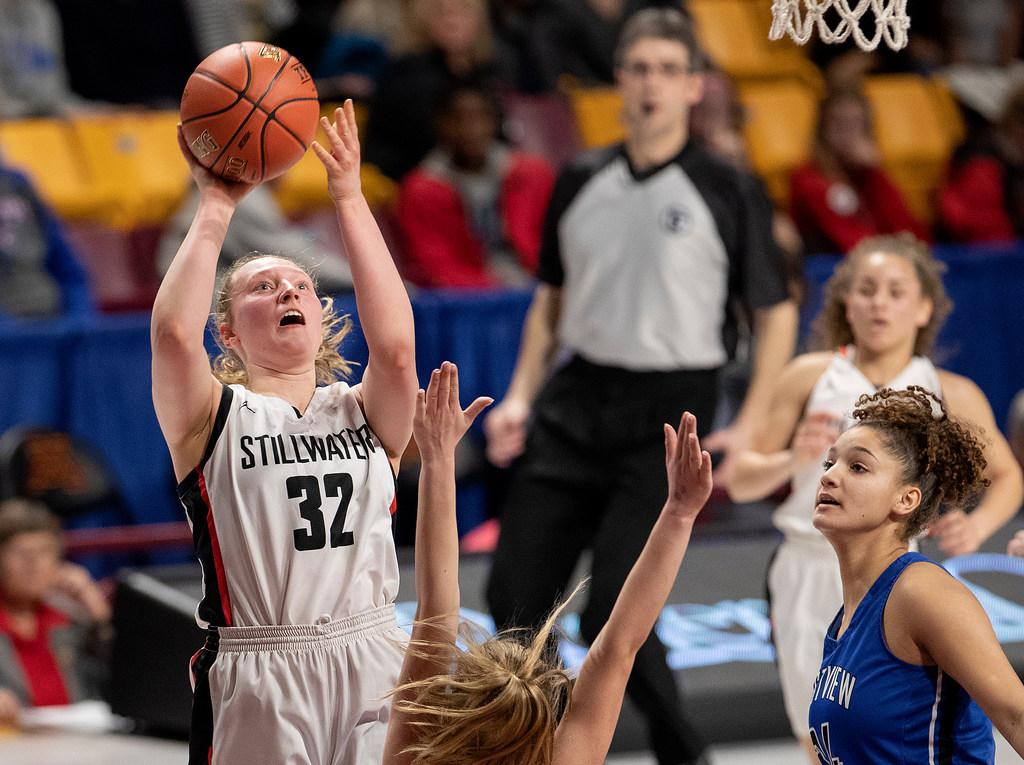 Liza Karlen (32) of Stillwater attempted a shot in the first half. Photo: CARLOS GONZALEZ • cgonzalez@startribune.com