Hopkins plows past Centennial to fifth straight 4A title game 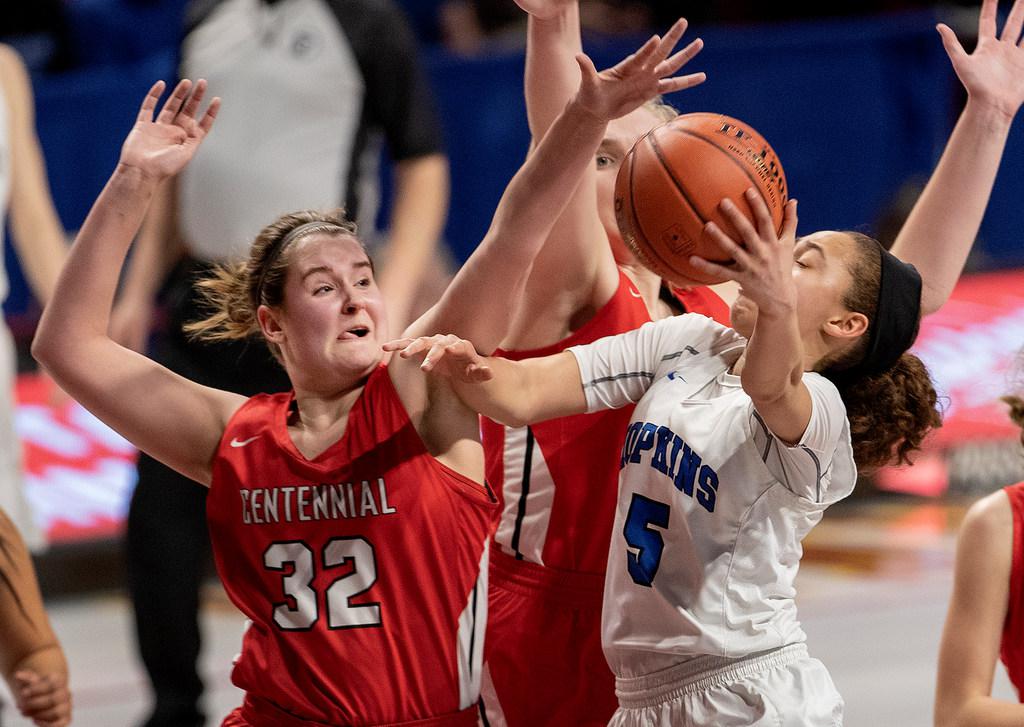 Amaya Battle (5) of Hopkins was fouled by Sarah Lavell (32) of Centennial in the first half. Photo: CARLOS GONZALEZ • cgonzalez@startribune.com

Centennial had heard about it, saw it on tape, prepared for it in practice. But actually experiencing Hopkins’ pressure defense was something the Cougars simply weren’t ready for.

Hopkins forced 29 turnovers and got 28 points from the amazing-in-every-game Paige Bueckers to rout 75-51 in the Class 4A semifinals Thursday at Williams Arena.

“It definitely feels like they have seven people on the floor,” Centennial guard Taylor McAuley said. “They know how to get in the passing lanes, get ball pressure. We knew it was coming.”

Chalk up the Cougars as the latest victims of Hopkins’ defensive tornado.

Centennial got the game’s first basket before Hopkins turned up the heat. Eight minutes of game-time later, Hopkins led 19-5 and never let the advantage get below double-digits.

While the Hopkins defense was doing its thing, Bueckers was doing hers on the offensive end. She scored 11 of the Royals’ points in their opening salvo on an array of lay-ups, lean-ins and long-range shots. She even added a no-look assist to teammate Taylor Woodson, showing off her range of skills.

“It’s something I think about all the time,” Bueckers said. “I’m an upperclassman on this team now. I don’t have time to sit back and watch how the game is going to play. I’ve got to go right from the jump.”

After trailing 38-23 at halftime, Centennial tried to rally by looking inside to 6-3 senior center Sara Stapleton. She had 12 of her team-high 16 points in the second half, but it barely made an impact on the game.

Hopkins (31-0) advances to Saturday’s championship game for the fifth consecutive season. The Royals won the Class 4A championship in 2015 and lost in the finals in each of the last three years.

Hopkins spotted Centennial the game's first basket, then destroyed any hope the Cougars had with a 19-3 run and cruised to 75-51 victory in the Class 4A semifinals Thursday at Williams Arena.

Paige Bueckers scored 28 points to lead the Royals (31-0), who advanced to the championship game for the fourth consecutive season.