Despite four key player losses, Stars are back in state tournament. 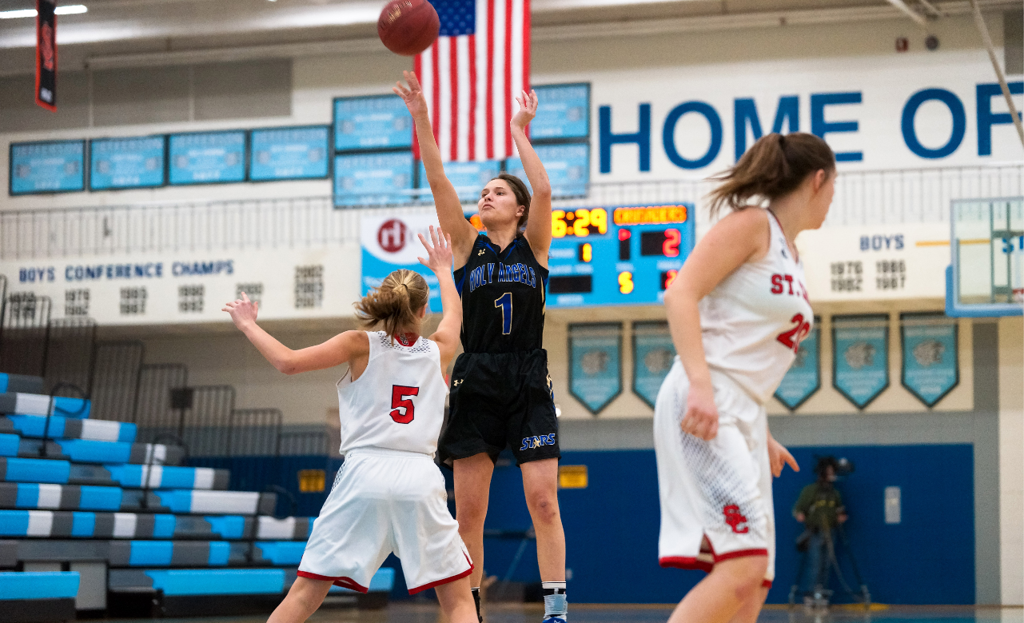 Sophomore Frankie Vascellaro is averaging 19.7 points in a breakout season for Holy Angels.

When he heard before the season that two vital players on the Holy Angels teams that had made three consecutive state tournament appearances were transferring to other schools, Stars coach Dan Woods wasn’t upset. He didn’t fret or worry or ask why. To Woods, it was an opportunity.

With four experienced players from 2018 gone — two to graduation and Destinee Oberg and Kaylie VanDer-Werf to other programs, Bloomington Kennedy and Burnsville, respectively — casual observers dismissed the Stars as factors this season. No way could that state tournament streak continue.

That was a mistake.

Holy Angels readopted the run-and-fun, three-point shooting style that Woods preferred and unleashed sophomore guard Frankie Vascellaro and her considerable potential. Despite a midseason swoon caused by injuries, the Stars are back in the Class 3A state tournament once again.

“Nobody wants to talk about us or our players,” Woods said. “But we always seem to be around.”

The first sign that this season had potential to play out as it did came in a text message from Vascellaro to Woods when it became apparent that Oberg and VanDerWerf were not coming back.

“At first, I was really nervous, so I talked to my dad about it. He said I can’t look at it that way,” Vascellaro said. “He said it opens up a whole new world of opportunity for me and for the team. That’s was all it took, one conversation. I texted Woods and said whatever you want me to do, I’m ready.”

It didn’t take long for the Stars to realize they had plenty of untapped potential, getting early-season wins over Cretin-Derham Hall and current state tournament entrants Cooper and Minnehaha Academy.

“After that Cretin game, I was like ‘OK, we can still play,’ ” Vascellaro said.

Emerging as the team’s go-to player, Vascellaro averaged 19.7 points and 8.1 rebounds per game despite missing six games because of an ankle injury. The Stars, running more than they have in the past, are getting vital contributions both expected and unexpected.

Seniors Alex Walker and Emma Mastre have stepped forward, Walker with her ability to distribute the ball and Mastre as the Stars’ main outside threat and source of levity.

“I like to bring energy, even if it’s unnecessary,” Mastre deadpanned. “Excessive cheering.”

Juniors Emma and Isabelle Henry add versatility and scoring. Sophomore forward Rachel Kawiecki has given the Stars a solid inside presence.

“The game is more action-packed,” Vascellaro said. “Everyone is doing more. In practices, people are doing stuff I don’t think even they knew they could do.”

Woods said the Stars still routinely get underestimated when they walk onto the court. He can’t help but smirk.